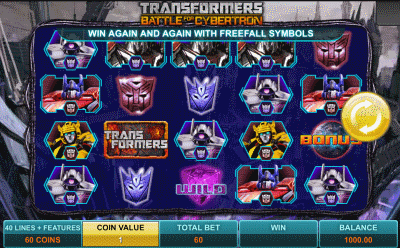 Transformers began in 1984 as a series of plastic children’s toys whose parts could be re-arranged to become robots, vehicles, animals – anything that was necessary to fight off invading aliens. The Autobots had their adventures detailed in a comic book series, an animated television series, a motion picture franchise and, thanks to IGT, a mobile slot game.

Transformers: Battle For Cybertron is a five reel game that disgorges payouts on 40 win lines. There is no progressive jackpot but enough free spins and multipliers and bonus play to satisfy any high roller.

Cybertron is the homeland of the Autobots and the key to its ultimate survival are mystical artefacts which can deflect the powers of a black hole that is threatening to suck the universe into its gravitational vortex. These Cyber Planet Keys are also of interest to the bad guys who show up in the guise of the Decepticons. Both forces are evacuated to Planet Earth to escape the voracious black hole and that is where the Battle For Cyberton takes place. Things are going to get nasty so you are going to want to bring some attitude to this fight. There are explosions, rings of fire, pulsating music and angry warriors.

If you reached puberty before 1984 or did not contribute to the more than two billion pounds the Transformers movies made at the box office you are going to need a scorecard to follow the action in the Battle For Cybertron. Fighting for the Red Team are the Autobots Optimus Prime, Ratchet, and Bumblebee and the Decepticons, dressed in blue, are represented by Megatron and Shockwave. There are also team logos and the all-powerful Transformer Symbol is the Wild.

There is plenty going on in this app and just like war, situations can change without warning and for seemingly no reason. Take the Mystery Feature where after a spin is completed a Transformer character appears completely at random, about to unleash mayhem. Optimus Prime destroys all Decepticon symbols he sees while his counterpart Megatron returns the favour to all Autobots. Grimlock and Shockwave detonate a random pattern of symbols. Ratchet may burst onto the scene when you are one Cybertron Planet bonus symbol away from Free Spins and become the third necessary to trigger the bonus round.

In the Free Spins bonus, Optimus Prime and Bumblebee have shown up for this knife fight with Megatron and Shockwave, each waiting for you to decide how this battle is going to play out. If you are a conservative leader you can choose 15 free spins with a modest 2X to 4X multiplier and keep casualties low. Or maybe just 12 spins with a bit higher 3X to 5X multiplier. Risk takers will send the troops after the 8 spins with a 4X to 10 X multiplier while hard-charging devil-may-care leaders will demand only 5 free spins but with the possibility of an 8X to 10X multiplier.

And best of all there is the potential for unlimited wins with the Freefall Bonus. After each win the responsible symbols are lacerated by falling symbols that can result in win after win after win. Now those are the spoils of war.