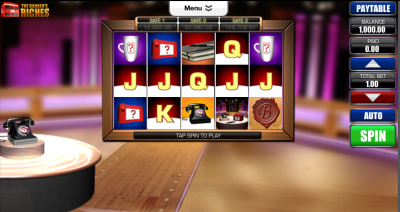 Deal or No Deal has been one of the most iconic TV quiz shows over the last decade. Hosted by the evergreen Noel Edmonds, the shows ability to tug on the heart strings of both players and their audience has made it into something of a generational classic. The format is carried over into the mobile slots world, and what’s great to see is that the game includes all the features that has made the TV show so popular.

The game includes a really perky 5 reel, 20 payline slot which is probably one of the most common in the industry. Feature wise you can play several bonus games, use wilds, scatters and also take down one of three progressive jackpots.

Deal or no deal is based around a pretty simple concept in that one player takes a box out which has a sum of money behind it. As they eliminate sums of money ranging between 10p and £250,000 the banker will start to offer them money for their box. They can either hold on for more money or simply take the offer. They have no idea what’s behind their box making some trades extremely lucrative and others seem dam right ludicrous.

The highlight of the game has to be the actual re-run of deal or no deal. You get into this section by finding three or more of the telephone symbols, which just so happen to be the scatter symbol. Once in, you will be asked to pick one box and then you keep on picking to eliminate other boxes. Obviously the higher the value of the boxes you leave behind will mean that when the banker comes to make you an offer – after 6 picks – it will be suitably higher.

Bear in mind that this feature is also linked to the progressive jackpot on offer. This is essentially the most you can play for. But, you need to be playing the maximum paylines to have a chance of winning this sum. If you aren’t, then another sizeable jackpot will be on offer.

The Reel Banker symbol will gain you entry into the free spins section here you can pick up a random amount of free spins. Each winning payline will be doubled and the game will end when this symbol reappears on the third reel of the game. You cannot re-trigger this bonus from within this feature.

The Bankers Offer is the final game of the slot and can be triggered by getting 3 or more of the bonus symbols. Here you will be asked to choose between 10 boxes and you can decide to take or leave the sum of money behind each box. Once you decide to leave that sum you cannot get it back, so its important to not be too greedy or extremely lucky in this game.