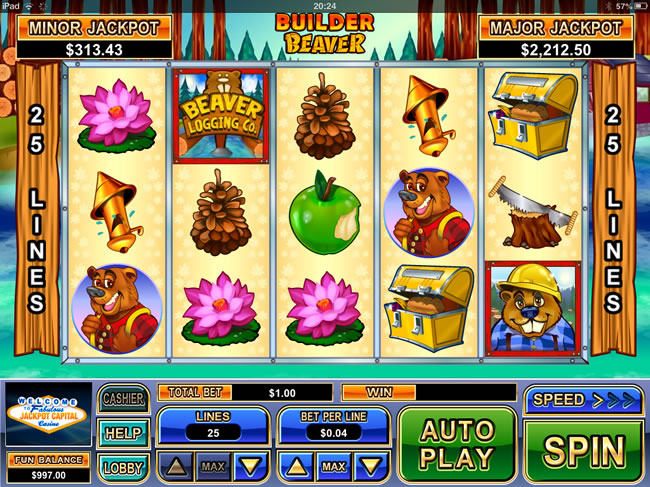 The beaver is a large, semi-aquatic rodent. He is seen mostly in the dark when he works the night away gnawing down trees and building castles in steams and ponds. He is a hard-working honest sort, not the type of creature from the animal world that would seem to be a hero to the get-rich-quick slots playing crowd. The sly fox would seem to be the animal of choice to emulate in the gaming universe. But that does not mean there is no place for the grinder, methodically building his bank. Those are the types who will relate to the industrious stars of Builder Beaver from Real Time Gaming.

Builder Beaver is a five-reel mobile slots game that gives out wins along 25 lines. You can hire this busy home builder and start him on the job for just 0.01 coins and pay him as high as 5.00 coins per payline so as much as £125.00 per spin can be risked. That is not a fixer-up from the Beaver Logging Company at that pay scale. There is an Auto Play feature to keep these beavers working 24 hours a day if need be to get the job done. The toothy carpenters are so busy there are two linked-play progressive jackpots – a minor one and a major one.

Builder Beaver marries an animal theme to a construction theme, all in a cartoon fashion. These beavers are not building a multi-chambered dam in a pond; they are constructing your dream cabin in the woods. We meet the beaver foreman puffing on a big cigar and his crew hauling logs on their brawny shoulders. We see a lumberjack saw that apparently is more useful than those celebrated beaver teeth. We see the apples they apparently snack on for energy during a rare work break and for the pie that Lady Beaver has baked. We also see a pine cone and a flower for who knows what reason. And somehow these beavers have had time to save up an entire chest of gold.

The Beaver Logging Company Sign is another Scatter and it will trigger 10 Free Spins when it appears anywhere on the reels three times. All prizes are doubled in these free games but during bonus play the Signs act as Beaver Scatter substitutes and after any winning combinations are paid they will transform into Beaver substitutes as well. Ten additional free games are awarded whenever three or more scattered Signs or three or more scattered Beavers appear anywhere during Sign Feature free spins. These are busy beavers indeed.

Meanwhile random jackpot contributions of no more than 1.5 percent of all player contributions to Builder Beaver are mounting. The Minor Jackpot normally resides in the hundreds and the Major Jackpot offers thousands. By the time the closing whistle blows you could be sitting pretty in your new house.