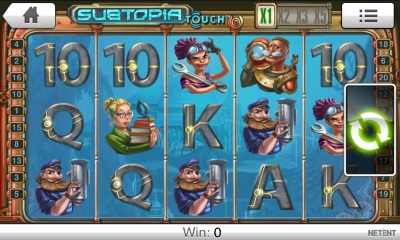 Underwater themed slots are definitely an area which has been popular over the years with many casinos. The Subtopia Touch slot for NetEnt carries that theme over into the mobile world. This is a 5 reel, 20 payline slot and looks superb on the mobile device.

The game includes an on-going multiplier, which is pretty uncommon within mobile slots, but keeps adding to the value of the slot throughout. On top of that players can enjoy a massive jackpot of up to $50,000 which is essentially available on each and every spin you make.

The Subtopia Touch slot carries a big nautical theme to it as you join the submarine captain and his crew in trying to find the buried treasure at the bottom of the sea. Alongside the captain is his team of researchers, mechanics and of course scatter and wild symbols.

One thing that this slot definitely has going for it is its looks. Aesthetically it is a really well designed mobile slot and for those of you that are familiar with their desktop version, then you will be happy to hear that these graphics have been transformed into the mobile version almost seamlessly.

The highlight of the slot undoubtedly comes from within the jackpot amount that’s on offer. As mentioned, a staggering $50,000 is up top which is easily one of the biggest jackpots that we have seen in the mobile sector at least. Whilst the slot may seem quite top heavy, it includes a good payout percentage of around 97%, meaning that you can happily tick over in Subtopia Touch whilst chasing the bigger prize.

The multiplier slider is also a feature in which that’s not all that common on the mobile software, but one we really like. Whilst at first, you might not be aware of what the multiplier in the top right of the slot, but as it continuingly moves between 1x, 2x, 3x and 5x, the multiplier could have a massive effect on how much coin you win. Although this is unconfirmed, this multiplier does appear to be pretty random in its selections, so keep an eye on it to see where you stand.

To get into the bonus round and the free spins section of the slot you need to collect, as per standard, three or more scatter symbols. Now what’s interesting about this section is the number of free spins seems to, again, play out totally randomly. Usually you can collect three, four or five icons which will result in a set amount of spins. But we have had differing amounts with each number, so potentially, this number could be limitless. The multiplier on the free spins will range between 2x, 4x and 6x, but will also include a skull and crossbones, of which will end your free spins once you hit this icon.

It may appear that the Subtopia Touch slot has a lot of uncertainty about it and randomness. And to a point, this is correct. But for us, at least, this makes it so much more exciting and the thrill of knowing that with just one spin, this beautifully designed mobile slot could win you a very hansom payday indeed.