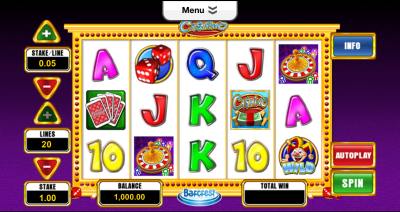 Cashino is one of the most colourful slots on the market with an emphasis on making money from your ‘cashino’. The game has a bit of 90’s game show type feel to it which really seems to add a fun element to the game. It’s well designed and has been one of the more successful converts from online to mobile slots.

The game offers up a 5 reel, 20 payline game that’s really a great deal of fun to play. It’s jam packed full of features that includes two bonus rounds, a free spins game and wilds, making it one of the better games we have played in a long time.

The theme is actually quite interesting and it feels as if it’s based one of those game show boards. After being brought up in a house surrounded by this type of Saturday night television, it’s definitely something that appeals to me, but this could be a totally personal thing.

In terms of design the game looks great and it seems to work better than most on the mobile devices. If anything, it’s possibly a little basic, but it’s more than made up for in features of which we will discuss in our next section.

First thing we want to point out is that this game can be enjoyed by pretty much every bankroll. You can actually go from 0.01 coins per spin right up to 500 coins per spin, including just about every type of mobile slots bettors. This also comes in handy when the jackpot is relevant to the amount you are staking with a potentially to take down a cool 250,000 coins from just one spin and picking up five of a kind of the wild symbols.

The first of the bonus games come in the form of the Cashino Card bonus which is represented by four playing cards on a green felted background. By hitting three or more on any selected payline, the slot will take you into the bonus game where you can choose between a number of cards. Your first pick will be that of your multiplier before the remaining cards will be flipped to reveal your winning amount.

The roulette wheel is the second bonus game and again you need to pick up three or more of these symbols to access it. Once in, the ball will start to spin around the wheel before landing on your prize.

Finally, the free spins round is activated by getting three of the dice symbols on your paylines. This will take you to the next screen and here you pick a symbol to be randomly awarded a number of free spins. These spins will include a multiplier of 2x your winnings with an additional maximum of 999 spins possible in the game.