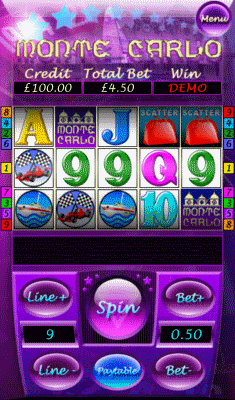 The first casino opened in what would become Monte Carlo in 1862 but the French Riviera coast was too remote at that time to make it a successful go. Eventually railroads were built and then tramways and fortunes improved. the Monaco Grand Prix road race started up in 1929 and by the time James Bond and Cary Grant and Grace Kelly in To Catch A Thief discovered the seaside resort Monte Carlo was shorthand for reckless extravagance and conspicuous displays of wealth. No wonder so many software developers tap into its decadent reputation for their slots games. mFortune just calls theirs Monte Carlo.

Monte Carlo is a five-reel mobile slots game with 9 paylines. You can get start the gambling with just a tiny 0.01-coin wager as bet as much as 1.00 coin per payline which seems like a restrictive upper limit for Monte Carlo veterans. Your maximum play is £9 per spin. There is no linked progressive jackpot but lucky punters can score an award of 1000X their initial stake.

The accoutrements of life in Monte Carlo are well-known by now: Gucci handbags on the arms, Rolex watches on the wrists, yachts in the harbour, and race cars in the street. mFortune brings them all to its aspirational slots game. Most of the symbols you will encounter, however, will be the minor playing card icons that are mostly standard issue.

The Yacht is the most valuable icon in Monte Carlo; it will return 1000X your stake for five lined up on a payline.

The Handbag is the Scatter and will activate a Free Spins bonus. Three, four or five Handbags anywhere on the reels serves up five, even or nine free spins. During the bonus play the spins cannot be re-triggered and all wins are recorded at your last wager and not multiplied.

That Monte Carlo symbol activates the Monte Carlo Bonus Trail Feature that takes you to a bonus board with a facsimile of the famous Monaco Grand Prix race course. You need two, three, four or five Monte Carlo symbols on a win line starting on the first reel to make it happen. You spin a race car along the course scooping up multipliers until you stop on an “X” which sends you back to the reels. Before you leave the course you could multiply your stake by 1500X. Now that’s Monte Carlo style.