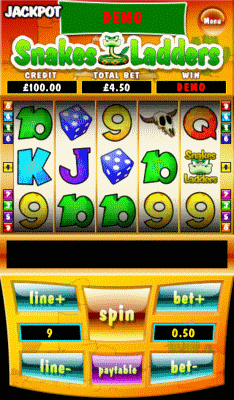 About 50 people die every year in Britain from falling off ladders. Since the only venomous snake in England, the adder, does not deliver enough poison to kill a human there are no British deaths caused by snakes. So ladders are more dangerous than snakes in the UK. Yet they are the key to success in Snakes And Ladders, mFortune’s transfer of the 16th century Indian game to mobile slots.

mFortune has sited its Snakes and Ladders game out in the Sonoran desert of Mexico and the American Southwest so there are plenty of Saguaro cactus and cattle skulls lying about. Towering buttes stand sentinel in the background. Well, there is no rule that you have to keep the game in its Indian sub-continent origins. Aside from the cacti and skulls the other symbols are game pieces like a die and snakes and ladders. The desert setting does give the screen an uplifting yellow and orange aura about it and the reels are clean and bright.

The Ladder is the Scatter and will trigger a Free Spins bonus. Three, four or five Ladders anywhere on the reels deliver five, seven or nine free spins. During the bonus play the spins cannot be re-triggered and all wins are recorded at your last wager and not multiplied.

The Snake is the Wild and will stand in for all other symbols to create winning combinations except for the Scatter and the Dice symbol.

That progressive jackpot can be yours if you line up five Snakes and Ladders Logos across an active payline. It will typically be growing into the thousands as you spin along.

The Dice are your gateway to getting to play the classic Indian game of morality. It requires the Dice to start rolling from the first reel across two, three, four or five reels to trigger the Snakes & Ladders Board Game Feature. You move to a bonus board littered with the familiar snakes and ladders and spin dice to move around out of the reach of the snakes. The higher you move up the board, the more the multipliers increase in value. If you land on a multiplier square, your original bet will be multiplied by the amount shown with a potential of as high as 1500X your stake. If you land on a snake, you’ll leave the board with no bonus. it is just like playing Snakes and Ladders as a kid, if you played in the middle of the desert with real snakes slithering about.