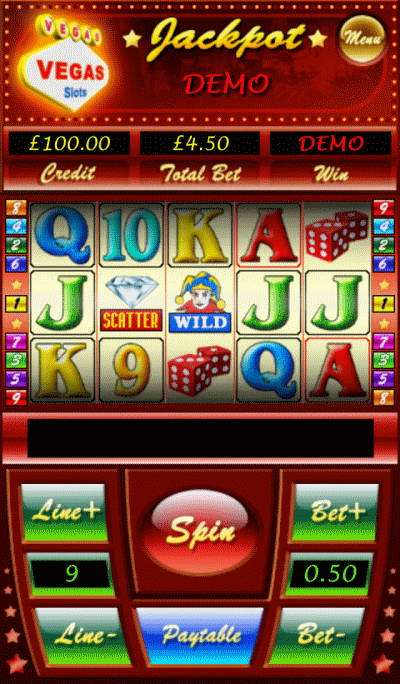 The first settlers to the Las Vegas Valley in the early 1800s were attracted by the artesian springs that made the desert bloom. They called it Las Vegas, Spanish for “the meadows.” It has been a long time since folks have come to Sin City for its verdant carpets of wildflowers. There were not even any paved streets in Las Vegas when gambling was legalized in 1931. Now there are 122 licensed casinos open for play in town. Las Vegas adopted slots in the late 1940s when they appeared on the casino floor of the Flamingo Hilton. They proved an immediate success but it wasn’t until 1963 that electronics were added to the machines bringing familiar sights and sounds. That is what mFortune seeks to capture in Vegas Vegas.

Vegas Vegas is a five-reel mobile slots game with 9 paylines. You can start the reels spinning with as little as 0.10 coins and wager as much as 1.00 coins per payline so as much as £9.00 per spin can be risked. There is a linked progressive jackpot with other Vegas Vegas players that grows every minute every hour so you can try your luck winning a real a Vegas style payout.

The screen replicates the look of a one-armed bandit pulled directly off a Vegas casino floor but the reels lack that injection of Vegas pizazz. The mundane symbols are a pair of dice showing an uninspiring trey and the stack of chips is depressingly small. Maybe we can build it up with some luck at Vegas Vegas.

Let’s start with the progressive jackpot which can tickle the high five figures. it is won with five Vegas Vegas logos across an active payline.

The Joker is the Wild and will substitute for all other symbols to create winning combinations except for the Scatter and the Gold Bars.

The Diamond is the Scatter and will activate a Free Spins bonus. Three, four or five Diamonds anywhere on the reels triggers up five, even or nine free spins. During the bonus play the spins cannot be re-triggered and all wins are recorded at your last wager and not multiplied.

Two, three, four or five consecutive Gold Bars on an active win line will activate the Wheel of Fortune feature where a wheel spins on a new bonus board. It spins with multipliers that you build until you have spun the NO LUCK placard and are shuffled off to the regular reels. Now your Vegas is showing.