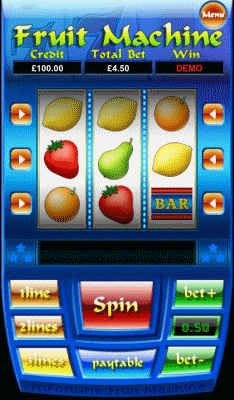 In the 1980s video slot machines were introduced which opened the possibilities of reels from three to five and the odds against the player from 16.7 million to one against to as much as 300 million to one against to win the biggest jackpots. Multiple lines and themes and bonus games became the standard way to play. The three-reel fruit machine began to be shuffled to the back of the casino floor and given the label of retro. But these games have never lost their fans and mFortune has made sure to include over version of the classic one-armed bandit in its mobile slots line-up.

Fruit Machine is a three-reel mobile slots game with 3 paylines. You can start the reels spinning with as little as 0.10 coins and wager as much as 3.30 coins per payline so as much as £9.90 per spin can be risked. There is no linked progressive jackpot with other Fruit Machine players and the largest in-game prize is 500X your initial stake so one spin can potentially return almost £5,000.

Fruit Machine is classic slots parlour stuff with thee only symbols being cherries, plums, oranges, melons, pears, strawberries, bars, bells and sevens. The display replicates a casino floor machine with bold, bright colours and sounds. The buttons to tap to move your bet and line play up and down are simple and easy to adjust. The only variable from most old-timed slots play is a pay table with 20 different award levels, thanks to some paylines that are created by mixed symbols.