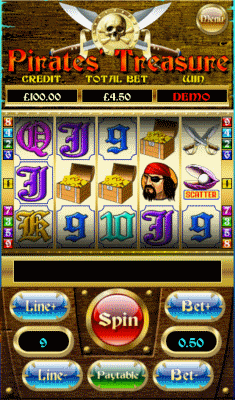 With all the pirate-themed books and movies and games you would think there would be buried treasure all over the world and fleets of sunken treasure in the seven seas. In fact there has only been one documented pirate ship ever discovered. One. That would be the Whydah captured by notorious pirate captain “Black Sam” Bellamy off the coast of Cape Cod in the Americas in 1717 and sunk two months later. It was discovered in the 1980s with more than 400,000 gold coins. There has never been a discovery of buried treasure chests. That does not preclude slots players dreaming of riches in games like mFortune’s Pirates Treasure.

Pirates Treasure is a five-reel mobile slots game with 9 paylines. You can start the reels spinning with as little as 0.01 coins and wager as much as 1.00 coins per payline so as much as £9.00 per spin can be risked. There is no linked progressive jackpot with other Pirates Treasure players.

This is a swashbuckling high seas pirate-themed slots game although not nearly energetically so. The lacklustre pirate symbols – crossed cutlasses, an eye-patched buccaneer, a chest of gold and a sailing ship seem like little more than selections from a clip art book. But the presentation is bright and blue, more like a holiday cruise than a dastardly band of pirates. Then again, if you were greeted by the high-waisted fellow in the introduction you would think he is less interested in relieving you of your gold than showing you to your table to enjoy a meal. There does not seem to be much of a walk-the-plank vibe around Pirates Treasure.

The Pirate Ship is the most valuable icon in Pirates Treasure; it will return 1000X your stake for five lined up on a payline. The Pirate and Cutlasses also bring back 500X and 300X respectively.

The Pearl is the Scatter and will activate a Free Spins bonus. Three, four or five Pearls anywhere on the reels serves up five, even or nine free spins. During the bonus play the spins cannot be re-triggered and all wins are recorded at your last wager and not multiplied.

The Gold Coin is the Wild and will substitute for all other symbols to create winning combinations except for the Scatter and the Bonus Treasure Chest.

When the Treasure Chests start lining up from the first reel across two, three, four or five reels the Bonus Treasure Chest Feature is triggered and your original bet can be subject to a 1500X multiplier. You are led to a new bonus board for a Pick Me game with three pirates’ treasure chests and your selection will reveal your multiplier. The pirate’s life is a simple, yet rewarding one.