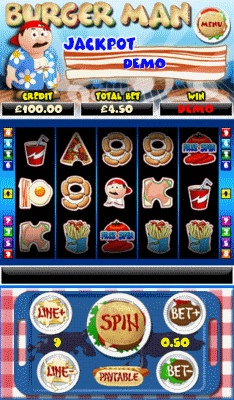 The world’s most popular sandwich, a ground meat patty lovingly sited in between two slices of bread, is said to have been created in New Haven, Connecticut in the United States in 1900 by a Dutch immigrant named Louis Lassen. The sandwich had no name until a group of rowdy sailors disembarked from their ship in port from Hamburg, Germany named the meal after themselves. Believe it or no, that is the most accepted of the many origin stories for the hamburger. mFortune’s Burger Man in its 2014 slots game is the classic backyard barbecuer.

Burger Man is a five-reel mobile slots game with 9 paylines. You can fire up the grill with as little as 0.10 coins and wager as much as 1.00 coin per payline so as much as £9 per spin can be risked. There is a progressive jackpot that keeps building as the burgers fly off the grill.

Burger Man is all about the food. The minor playing card symbols are made from sausage links, bacon and eggs and doughnuts. The King is even formed by virtue of carefully placed bites of a juicy burger. The Burger Man does not just have the beef patties on the grill; his feast includes pizza and French Fries. The burgers come with all the fixings and condiments and drinks are all available. If you cannot stay and eat take it all away in a styrofoam box.

The Double Decker Burger triggers the Burger Man Trail when two, three, four or five burger symbols appear on any active payline. The more symbols you gather on the line the more coins you can win in the Trail Feature. This Click Me game takes you the Burger Man’s table where you click on the take away boxes as they roll down a conveyor belt. Each one contains a meaty coin reward. You continue chowing down on prizes until you open a box with a green salad inside. Every carnivore’s nightmare.

The Tomato is the Scatter and will activate a Free Spins bonus. Three, four or five Tomatoes anywhere on the reels serves up five, even or nine free spins. During the bonus play the spins can not be re-triggered and all wins are recorded at your last wager and not multiplied.

The Mustard and Ketchup squeeze bottles are the Wild in the Burger Man and substitute for all other symbols to create winning combinations. The Wild can also fire up extra coins for your bank – as much as 2000X your wage for a full payline of five.

The Burger Man himself is the grill master of the progressive jackpot. Five Burger Man icons will release the jackpot. The Burger Man is also not afraid to mix new ingredients into his recipes – if you mix a line full of Burger Man jackpot symbols and Tomato Wild symbols he will pay out 300X your stake. I’ll take that to go.