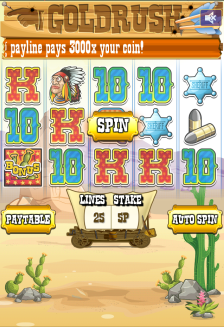 The first gold rush in America came in North Carolina when Conrad Reed found a shiny 17-pound rock in a creek and brought it back home to use as a doorstep. Three years later it was identified as being gold. The next gold rush took place in the state of Georgia in the 1820s. But no one seems to remember these. The only gold rush that matters in the United States is the one that brought 300,000 people to California in the late 1840s. That is the gold rush that mFortune is channelling with its classic mobile slots game that enables you to replicate the excitement of a gold strike in your hand.

Gold Rush is a three-reel mobile slots game with 5 paylines. You can start the reels spinning with as little as 0.10 coins and wager as much as 1.00 coins per payline so as much as £5.00 per spin can be risked. There is no linked progressive jackpot with other Gold Rush players and the largest in-game prize is 500X your initial stake.

The gold rush theme is really just a label for a classic fruit machine. The only thing that makes it a gold rush is that the traditional high-paying Sevens have been replaced with single gold bars. You might have thought they would choose to make the bars that read “Bar” the gold bars but they chose to send the lucky sevens to the sidelines instead. The game bars they actually made oval.

It is up to the toothy cartoon prospector on the cover to impart the only bit of Old West gold rush in Gold Rush. Looking at the rotund fellow in the blue jeans reminds you that hardly any prospector got rich in the gold fields. The greatest fortunes made in the California Gold Rush were by entrepreneurs like Levi Strauss who made their money selling supplies to the miners. But it was still probably easier to locate gold in the California hills than to find the gold rush theme in Gold Rush.

There is only basic three-reel play in Gold Rush. No bonus strikes are coming your way, you are not going to unearth and free spins.

The only thing that passes for a feature here is the presence of legal Nudges and Holds. When you see a promising reel configuration that with a little massaging could produce winning combinations you can tap the Hold/Nudge button beneath each reel.

Three Gold Bars on an active payline will bring back the top prize of 500X your initial stake. When that happens it will not matter what the theme of the game is.