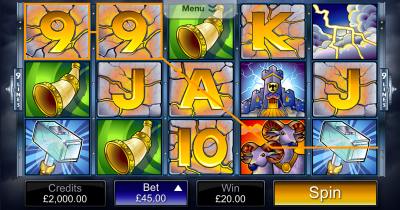 Thor is a pretty simple guy. Cross him and you can expect to be dancing among thunderbolts for the foreseeable future. His fearsome reputation made the hammer-wielding Norse God one of the first characters Microgaming tapped for its line of slot games.

This is a five-reel mobile slot that doles out money on nine paylines. There is no progressive jackpot but a bonus game with free spins to sock away the ancient krones with returns of up to 10,000X your stake.

The power of Thor is on full display in Thunderstruck. You get the mythical hammer and the lightning bolts and the impregnable castle of Thruthvanger on Asgard, from which the Thunder God dispensed justice. The game moves much too fast to visit all 540 rooms in Thruthvanger. There is a Gjallarhorn to announce the presence of intruders. You also get a pair of rams which, although sheep had no role in Norse mythology, lend an air of virility to the whole proceedings. We get a stern-faced vision of Thor himself but sadly the app does not give us Sif, his wife whose long flowing hair was made of solid gold. The minor playing card symbols are brightly illuminated by cracks of thunderbolts. The quick-stepping soundtrack keeps the action moving apace.

Thunderstruck offers a wide range of stake options and lightning strikes often enough during basic play to keep you fretting about the fact that there is only one Bonus feature.

Thor plays the role of Wild and implores his subjects to create winning combinations which he generously doubles. If you catch the Thunder God out and about town five times on the same payline he will surrender 10,000X the original stake to your account.

The Ram tandem is the scatter and three or more of the studly ovines on any of the five reels triggers the Bonus, which is a round of 15 free spins. The screen remains the same but all money banked is tripled. The Rams can re-appear and trigger more free spins.

Thunderstruck also provides a Gamble Feature where you can double or quadruple your winnings on the turn of a card. The game is as simple to comprehend as thunder and lightning. One thing you are sure to learn from the roiling action of Thunderstuck – you do not always have to fear the wrath of the fickle gods.