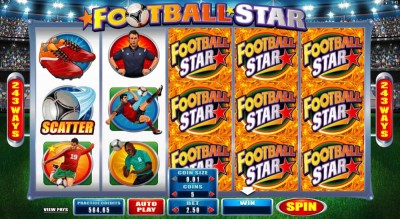 A mobile slots game called Football Star that is not all about George Best? Hard to fathom but Microgaming’s Football Star, released to synch with the 2014 World Cup tournament in Rio de Janeiro, seeks a wider audience with football stars from different nationalities. You can put your own names on the faces.

Football Star is a five-reel slot with Microgaming’s favourite 243 ways to win. It takes only 0.50 coins to kick off the game but once you get caught up in the throbbing pace of play you will want to pump in the minimum of 50 coins to cover every chance of winning. There is only one game per night scheduled on the pitch so no progressive jackpots are available. There is an Auto Play option if you do not want to dawdle contemplating all 243 ways to wins.

The hard-spinning action takes place in a packed football stadium, three tiers fun of frenzied fans. In addition to the football stars we get a humourless referee, a cutaway of a football pitch, a star-studded football shirt and gleaming football boots. The pounding soundtrack pushes the play to a heated crescendo.

The main basic game feature is the Rolling Wheels where the symbols in any winning combination dissolve to allow additional symbols to take their place on the pitch, possibly creating more wins. You can go on long runs before turning the ball over with this feature.

The Football Star Logo is the Wild and it is stacked on Reels 3 (18 Wilds), 4 (25 Wilds) and 5 (3 Wilds). Every now and then, without warning, a striker will appear and fire a shot in the direction of the three middle reels, turning one of the reels completely wild. If that bit of good fortune does not produce a win the reels will spin again with the Striking Wilds until you land a coin trophy.

There is nothing hotter in Football Star than the flaming football that is the game’s Scatter. If properly positioned on the pitch it can award free spins – 15 for a trio of flaming balls, 20 for a quartet and when an entire midfield fills with five sizzling footballs you have 25 free kicks at prizes. During this extra time the Rolling Wheels are still collapsing but this time a multiplier is attached that increases up to a maximum of 10X your bet with each win. These freebies are only awarded once per bonus round, no extra time put on the reels by re-triggering. Win big in the beautiful game!