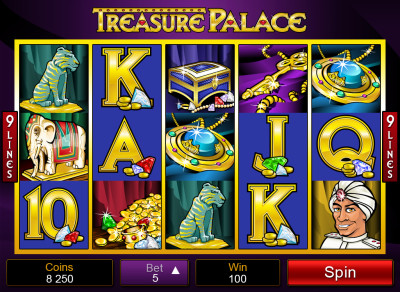 In June of 2011 an exploratory team of former judges and temple officials, none of whom would make anyone forget Indiana Jones, uncovered gold and jewels stuffed into six underground chambers of the Sree Padmanabhaswamy Temple, deep in the Kerala province of southern India. The treasure trove in the 16th century temple, that included artefacts such as five-pound gold necklaces, hordes of gold coins and thousands of pieces of antique jewellery studded with precious stones, was estimated to be worth £30 billion. Those are the visions of riches Microgaming wants spinning through your head as you play their Treasure Palace mobile slots game.

Treasure Palace is a five-reel game with treasures lying on 9 paylines. You can go treasure hunting with only one coin per win line and coin size varies from 0.25 up to 2.00. There is no progressive jackpot in this palace but the top in-game award is 10,000 coins. A Max Bet option is available to put 18 coins into play on each spin.

Representing the riches in Treasure Palace are Piles of Gold Coins, a Treasure Chest, a Golden Elephant, a Jade Tiger and a smiling Maharaja. All are propped up in front of a different colour curtain for some reason. The minor playing card symbols are big and bold and gold and each is augmented with a pile of jewels and gold coins. Everything is rendered in endearing cartoon graphics.

The Maharaja is the symbol to keep your eye out for as the reels spin. Gather five of him along an active pay line and that is where the 10,000-coin prize is found. Just two of the great ruler will line your humble pockets with 12 coins. In fact all the major symbols pay for two appearances on a pay line save for the Treasure Chest. In another quirk of the pay table the 10 will not pay for four symbols.

The Jewelled Pendant sparkles in the role of Wild Symbol and it will substitute for all symbols except the scatter to help form a winning combination to extract riches from Treasure Palace.

The Golden Key acts as Scatter and it is a multiplier inside the Treasure Palace. Three Keys will multiply your staked bet by 5X, four Keys will pump your bet by 20X and a full complement of five Keys will release 50X your original bet.

That’s it for treasure hunting inside this palace. No free spins or bonus rounds hidden deep in the catacombs. Maybe that is why the Maharaja is smiling so much.