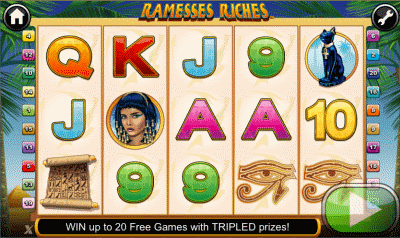 Ramesses II normally gets the nod as the most powerful of all pharaohs of ancient Egypt. He put 66 years on the job before wasting away at the age of about 90 and expanded the Egyptian Empire greatly in all directions, bringing back massive wealth to the kingdom on the Nile. That is certainly worthy of Microgaming designing a mobile slots game around.

Ramesses Riches is a five-reel game with 20 paylines. As little as 0.01 units will get the reels spinning and you can pump them with as many as 20.00 units. There is no progressive jackpot but Ramesses will dispense as many as 5000 coins himself. Autoplay is available.

The setting is the Egyptian desert with palms swaying and giant pyramids dotting the horizon. There are papyrus scrolls, ancient Ankh symbols of life and Egyptian black cats to create an ancient atmosphere and two characters: Ramesses, portrayed in the peak of his powers, and his favourite queen, Nefertari. Music that is now identified with the mystery that is ancient Egypt accompanies play.

The smart money does not get upended in Ramesses Riches since the great ruler himself is the Wild. He will substitute for anything he darn well pleases but does not take the place of the golden Ankh which has the role of Scatter. Ramesses also decrees that any winning combination he is a part of will double. And if five of his likenesses line up on a win line the game’s top prize of 5000 coins is added to your bank. Nefertari has been given the power to grant the next highest award – she will dispense 1000 coins for five across the reels.

The key to Ramesses Riches is the golden Ankh which triggers a Free Games feature when three or more are encountered. Four free games are awarded for each Ankh in the activating combo and in bonus play all wins are paid 3X. Of course if Ramesses appears during the free spins the payout becomes 6X. This lucrative feature can be re-triggered for even more cracks at the Egyptian pharaoh’s riches.

If you feel Ramesses the Great has not been generous enough there is a Gamble feature where you can double or quadruple your most recent haul on the turn of an ace. This game of chance is the one result that is out of the omniscient ruler’s control.