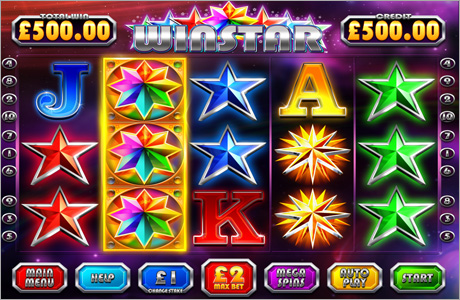 The Walt Disney Company has released a lot of classic animated movies that have defined childhood but only one song has become Disney’s representative song – When You Wish upon a Star from the 1940 story of Pinocchio. It was the only Disney song to win an Oscar. With Winstar from Blueprint Gaming you have a chance to add more than hardware to your trophy case.

Winstar is a five-reel mobile slots game that lights up wins along 10 pay lines. The minimum be its £1.00 and the paylines are fixed. What you will be wishing most is the progressive jackpot. There is an Auto Play option to transport you through this star-studded universe.

The silver starburst Winstars appear stacked so it is actually possible to fill the entire screen with 15 identical symbols. If that cosmological event occurs you will win 1,000.00 times your stake.

Meanwhile the Gold Winstar spins to reveal a mystery symbol at random when it bursts into the darkened sky. This can result in a winning combination or even fill the entire screen with matching symbols.

As the reels spin you may notice an entire reel become framed with a golden band. This is you tip-off that you have entered the part of the cosmos where the progressive linked jackpot lurks. Should the entire screen be filled with five gold-cased reels you have won the progressive jackpot that is stocked with four percent of all the monies bet by Winstar players. This can happen with any stake on any spin. The progressive jackpot is always reset to a minimum amount determined by the operating casino so there is always a substantial prize to be played for. And may all your dreams come true.