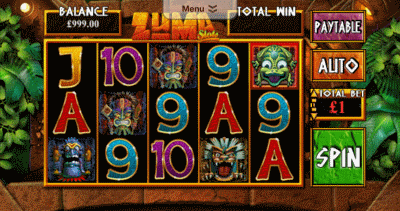 Moctezuma was a great Aztec ruler who expanded the empire further than any leader before him. But apparently not so great since his subjects had a less than deferential nickname for him: Zuma. Not even Big Zuma. Zuma first became a hit in the video arcades and has since made the inevitable transformation to mobile slots devices thanks to the developers at BluePrint Gaming.

This is a five-reel game with 20 paylines on which you can wager one coin each. There is no progressive jackpot but a possible return of 25,000 coins that will have you grabbing a machete to hack through the jungle in search of Aztec gold.

Zuma immerses you in the Aztec civilization such as the Spanish conquistadores encountered, and ultimately destroyed, in the 16th century. The screen is dark and foreboding and populated with fearsome, vividly drawn Aztec idols. The steady drumbeat of the soundtrack pounds on in the background, ever ominous. At its heart Zuma is a martial game with wins greeted by explosions and even the frog, an Aztec symbol of joy, only seems happy that he is able to off a few Aztec Idols with a blow gun. Big wins are greeted by the deep-throated evil laugh of the jungle master that never seems to portend good things ahead.

The Zuma Game Logo is the Wild icon and replaces all other symbols. if you line up five of them on a payline you will score the maximum jackpot. When it joins in a winning payline a drumbeat commands the attention of the jungle and you are awarded a multiplier on the Zuma Game Logo from between 2X and 10X to be banged against your stake.

The smiling Aztec Frog is the Scatter, awaiting to award free spins. To that you will need three Aztec Frogs at which time you are directed to the bloodthirsty amphibian’s personal shooting gallery. The targets on the range are four Aztec Idols. The Frog shoots one to determine how many free spins to give you and when the bonus is over it does away with another Idol to find out the multiplier for your winnings. You have no say in this sacrifice. This bonus can be re-triggered and the deicidal Frog set loose again.

There is also an innovative Gamble Feature where you are given more of a chance than those unfortunate Aztec Idols. You are presented with a quartet of Gamble Reels, each with a multiplier and corresponding rate of success. For instance Reel 1 has a 50% chance of delivering a 2X multiplier and Reel 4 has a 10% chance of returning a 10X multiplier. If you win you are given the option of cashing out or banking half of your booty and risking the other half. You can engage the Gamble Feature until you hit the maximum winnings or tap out completely.