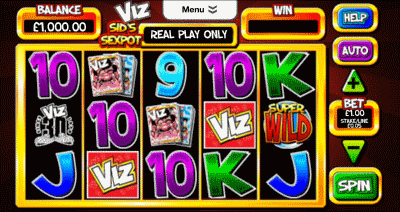 The geniuses behind Viz magazine liked to say that no one was ever supposed to learn anything from their adult humour magazine which makes it a superb platform for a mobile slots game. The idea behind Blueprint Gaming’s Viz is just to gather up some of the familiar characters from the 35-year run of the magazine and have a little fun. And perhaps pocket a little money along the way.

This is a five-reel spinner with 20 paylines. You can bet as little as a single coin and hope for a jackpot of 10,000X. There is no progressive jackpot and an Autoplay option.

You get the cast of characters that populated the comic trips of Viz from the days when it was one of the top pick-ups off the news agent’s stand. There is Roger Mellie “The Man of the Telly” whose Teflon existence enables him to keep his job through foul-mouthed observations and misogynist rants; there is Johnny Fartpants, always known to have a commotion in his trousers with the power to level houses; Sid the Sexist whose success with the ladies was exceeded only by everything else in his life; and, well, you get the idea. if you know the scores and scores of comic characters you will be down with this app, otherwise you will just be looking at cartoon characters, delivered in static fashion with no animation, with as much meaning as J-Q-K-A.

All the games in the Viz are based on characters birthed in the magazine. So to pick a multiplier you get the Usual Suspects as a Scatter for Pick A Win. Anytime the Usual Suspects appear three or more times, you can select your favorite Viz character from among Biffa Bacon, Sid The Sexist, the Flat Slags, Roger Mellie, and Johnny Fartpants and collect your multiplier that can be 500X your original stake.

Johnny Fartpants gets his own scatological game in Viz – the Wheel of Fartune.This game is also triggered by at least three flatulent blasts from Johnny Fartpants which lead to spins and another multiplier to increase your bank.

The Roger Mellie Bonus Show uses televisions to generate free spins, from 50 to a screen-hogging 200. Sid’s Sexpot Jackpot is a progressive one and Five Super Wilds could squeeze a $25,000 jackpot out of this cast of characters. Viz – the magazine – has created hundreds of characters and Viz – the mobile slots game – does its best at giving as many as it can a role to play.