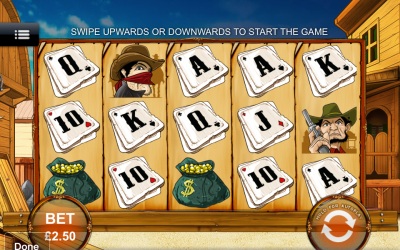 For anyone that has ever seen a Western movie, then this slot will likely get your nostalgia running. The Wanted mobile slot is as fun as western shooter in a smoky bar ever was. Graphically it’s got that goofy feel to it, but in essence this really makes it what it is.

Interestingly the slot brings you a 5 reel 25 payline game, which is on the larger side of the majority of PlayTech mobile slots out there. It’s pretty feature rich as well, offering you up two bonus games and a wild feature, but unfortunately no inclusion of any free spins.

The slot is all about the Wild West and everything that comes along with it. Shoot ‘em ups in the bar, drinking copious amounts of whiskey, the sheriff catching local crooks and so much more. It’s a really fun app to play, even if the concept is hardly one that’s new to the industry. The design, as we mentioned, is superb and it looks great on both smartphone and tablet devices.

It’s your job throughout the slot to not get caught by the sheriff and also try and release your mates who have already been locked up.

The bonus features are where this game really comes to life. This could be argued that this is true for all slots, and we would agree, but the games on Wanted are such good fun, it’s what makes the slot. The first comes in the form of the six shooter bonus that requires you to pick up the gun symbol on the first and fifth reel.

Once you are in, the scene is set for a good old fashioned Western shootout. You need to choose who you want to chase first out of the three characters. Once you’ve done this you get 6 bullets to try and shoot your villain. The fewer bullets you use to shoot him, the greater the reward.

The second feature is called money bags and whilst it’s much less interactive than the six shooter, it does yield a good amount of rewards, generally. It’s a much simpler concept; you get three money bags to choose from, pick one and then your prize will be revealed.

Lastly, we just want to mention probably the only real downside in the game, and that’s its return to player rate. At a measly 92% it’s probably one of the lowest we have come across, but in all honesty, in the time we were playing, this never really crossed our mind and that it was paying out an usually low amount. The difference between this and say a 97% game will, in the long term at least, be noticeable, but for most, the difference will be minimal.