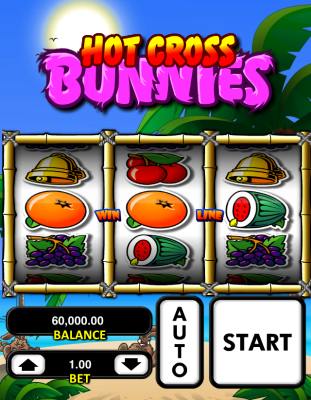 Hot Cross Bunnies is a 2013 release from Realistic Games that is another in their line of games that dwell among the traditions of slots while simultaneously dabbling in the future of gaming.

This is a three-reel, single line payout game and the app does not allow for progressive jackpots. But the arcade-style game offers up its own standard 300X jackpot within the app.

All sly references to Easter aside, these bunnies are hot and cross as in angry and bothered. And don’t let the aquamarine waters, white sands and tiki bar motif fool you, Hot Cross Bunnies is not trying to transport you to a tropical paradise, it wants to walk you down memory lane into a Vegas-style casino. The styling is sharp and the sounds are raucous and intended to sweep you up into the action. As for those adorable bunnies, they won’t be happy until they get off that oppressively hot island.

Even with its sporty modern features Hot Cross Bunnies plays like a classic slot machine. After the first spin everything is random, if you want it to be. The symbols are those of a classic fruit machine, save for those ornery bunnies. Cherries pay 2X, oranges 3X, grapes 5X, watermelons 10X and bells 30X. That’s the extent of the payout table.

Completely at random, in the fashion of the best pub games, Hot Cross Bunnies will stop after a losing spin and offer up a Nudge with up to three bumps to forge a winning line. You can do it manually or set the game to Autonudge and get on with the spinning. Even if you expend brainpower trying to get the best payline and fail, Autonudge will assume control and give you the best payout anyway.

There are no free spins in Hot Cross Bunnies but if there is no way to win after a Nudge sometimes the game will take over again and launch a Super Spin with a guaranteed win. Again, completely random. After a win there is a Hold feature that occasionally locks up winning symbols and generates multiple wins. Players can accumulate up to nine holds. Also a completely random feature.

Any time you land three snarling pink cottontails it triggers the Bunny Money Feature that is the gateway to big money in this mobile slot game. On a new screen reels spin and symbols multiply like, well, rabbits. Three identical symbols return up to 30X your bet and the reels spin on until they randomly stop and bonus time is over. Just another way Hot Cross bunnies provide modern day surprise inside an old-fashioned package.