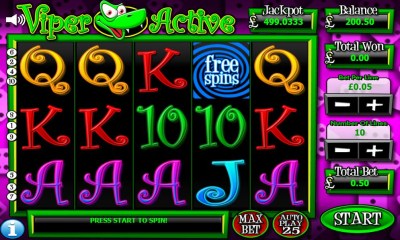 Alchemy Bet, producer of fast-paced Vegas-styled three-reel slots games, has been lured from its Garden of Eden by a toothy viper into the world of video slots with this venomous action game based on the childhood game of Snakes and Ladders.

Viper Active is a five-reel mobile slots game that pays out along 20 paylines. It is a progressive slot but also tempts players with lucrative bonus rounds. There are options for maximum bets and Autoplay for 25 spins with the tap of a button. As little as 0.01 units gets you into the game and big spenders can pony up as much as 10.00 units on each of the 20 win lines.

You might not want to meet this serpent in a dark alley but if you do Viper Active will certainly light up the night with iridescent greens, reds and purples. The high-value playing card  symbols perform most of the grunt work in producing basic wins in the game with five Aces on an active payline returning 250X your stake. When the cartoon snakes show up they are there to invite you into bonus games. Enter at your peril.

The groovy Wild and Free Spins symbols on their psychedelic backgrounds usher in exactly what they promise. Three Free Spins bring you 10 free games, four tack on 20 and five across a payline trigger 50 free goes at the viper. The Wild stands in for any other symbol on the reels to make winning combinations and those prizes are doubled. The Jackpot is excluded. Also if five Wilds spin onto a payline the return is as big as you can find in Viper Active basic play – 250X your bet.

Three Pick A Win icons on Reels 2, 3 and 4 present you with three baskets on the reels, each containing an electric green viper. Your selection reveals a multiplier between 10X and 100X to juice your winnings.

The appearance of the Gold Viper Coin transports you to a new screen to the accompaniment of a grumbling soundtrack. You are in control of the music, however, and when you tap to stop it your cash reward is revealed from a matrix of gold coins. And so it goes until the musical cash grab is over.

The Viper is the Scatter and three, four or five deposit you in a game of Snakes and Ladder in the role of Harry the Hunter. You bound around the board according to the vagaries of a random number spin, picking up cash multipliers until you meet your certain doom via an encounter with the Viper. You may even chance to fall through a Mystery Door as you proceed from board to board eluding the venomous bite of the Viper.

All of this and that progressive jackpot that is always building with three percent of the stakes wagered by all Viper Active players. Five Jackpot symbols on a winning payline make it yours. You are Viperactive!