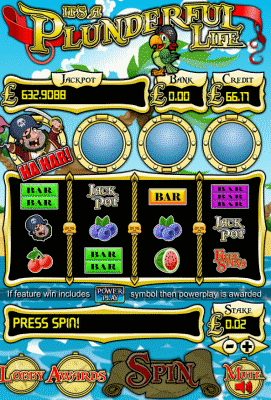 Alchemy Bet is not the first to go all ‘punny’ on the classic holiday film “it’s a Wonderful Life.” Here the developer has used the movie title as an entry into the pirate world of mobile slots.

It’s A Plunderful Life is a four-reel slot that plays out along a single win line. The big score in this game of stolen treasures is a progressive jackpot but there is also free spins to be pursued and an in-game mega bonus.

The setting in It’s A Plunderful Life is a tranquil lagoon that appears to be the home base for a manic buccaneer who shows the souvenirs of a hard life at sea. He sports a hook for a right hand and an eyepatch over his right eye. By this point in his dastardly career he is left with only two teeth. His only companion left on his ship flying under the colours of the Jolly Roger in a pirate parrot. The two have a treasure map that should help them locate their buried treasure chest and gold coins. This is all backdrop for the actual play on the slots which is based on the classic gaming parlour fruit machines. The symbols that spin on the reels are cherries, sevens and bars, accompanied by the one-eyed buccaroo.

The Red Seven is the biggest payer in this lagoon, returning 50X for three in succession on the payline and 250X for a full win line. The Blue Seven is almost as welcome a find – it pays 40X and 100X, respectively.

The Free Spins symbol does not lie when it pays off and you receive a chance for some plunder without any stake when three or four line up on a payline. The one-eyed Pirate symbol is the Scatter and delivers a prize as well in the form of a bonus game when three or more show up. It is a run-it-up-the-mast feature game that delivers random multipliers up to 1000X before you hit the Collect notification and return to the deck to continue spinning.

There is also a random Nudge feature built into the game that can appear any time after a spin has failed to deliver a winning combination. You could be given up to four “nudges” to push the symbols into an advantageous position on the reels. If you want to preserve brain power you can also engage the Auto Nudge option when this feature arrives.

The progressive jackpot is won by four Jackpot icons on the payline form the pool of all It’s A Plunderful Life players. Three in a row will return a pleasing 250X your stake in gold coins. Roll Up! Roll Up!