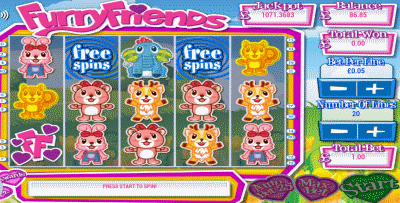 Alchemy Bet never strays far from the warm and fuzzy variety of mobile slot games even when it is featuring hardened criminals and blood-sucking vampires. So you can imagine when the developer brings out a game called Furry Friends it will be soft around the edges.

Furry Friends is a five-reel slot with 20 paylines of action. The 2014 game release features a progressive jackpot and bonus rounds for additional chances to win.

Alchemy Bet does not stick too harshly to textbook taxonomy when gathering up its Furry Friends. So we get animals such as elephants and chickens and reindeer and frogs in our too-cuddly for words menagerie. Not a lot of fur to stroke there. Since we are not towing the scientific baggage of biology we can dispense with any pretence to exacting graphics so all the animals are given soft pastel colours as well in this doll’s world. Any shades not blue, yellow or pink need not apply. Wherever the graphics department at Alchemy Bet can do so they have inserted hearts onto the screen. So from this adorable collection of animals which would you expect would be anointed the most valuable symbol? If you guessed the improbable “Yellow Chicken” you have probably played Furry Friends before.

This cuddly cast of characters conspire to bring slots players several bonus games. The Furry Friends Logo symbol will trigger a Pick Me feature with bunnies that you pluck from the field until you encounter a “Collect” directive instead of a cash reward and you slink back to doll-infested reels.

Three blue Watering Can symbols stacked on the centre reel will unlock a quick Pick a Win feature that entitles you to a random coin deposit into your bank. And when the Free Spins placard appears three, four of five times on the reels the Scatter brings, as it name promises, free spins. All awards during bonus play remain at the level of your initial stake and cannot be re-triggered.

The bounty of bonus games dished out by the Furry Friends can cause you to overlook the game’s big draw – a progressive jackpot that is constantly fed by 1.5 percent of all wagers placed on the game. It will require a mighty effort of five Jackpot symbols to wrest this prize from the hands of the Fuzzy Friends and if it happens the pot returns to a base level. Never any hard feelings generated in this snuggly environment.