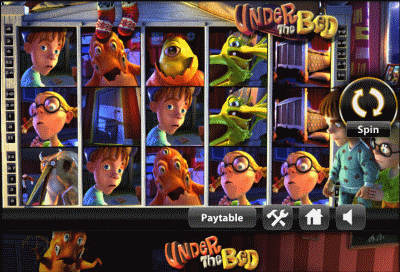 Betsoft Gaming favours narrative-driven plots to drive the action in its mobile slots games and in Under the Bed it introduces two pre-teens named Jesse and Jane who have been left alone in a darkened bedroom with not-so imaginary monsters rustling about.

Under The Bed is a five-reel slot with 30 configurations of paylines. Wagering can start with 0.02 coins and continue up to 1.00 with a maximum bet of 150. There is no progressive jackpot but the top in-game jackpot is 2,500 coins. There is an Autoplay and Double Up gamble option for faster and bigger results.

Jesse and Jane have been left alone for the night and the single lamp in the bedroom scarcely lights up the bureau top. The parents who purposely bought their kids beds that sit off the floor and installed closets in their rooms are around, but never when it matters. And someone left the window ominously open. As young Jane clings tremulously to his shirt Jesse acts alternately emboldened and scared out of his ten-year old wits. The cast of monsters, all sporting disconcerting eyeballs, peek in from every corner of the room from behind Jesse and Jane as the soundtrack emits the occasional whimper. This is one scary bedroom.

There are nine game symbols that pay out in Under The Bed, with Jane bringing the highest rewards. When the Monsters create wins they fly around the room or crawl up bed posts to get menacingly close to the wide-eyed brother and sister.

During basic play, after any winning combination on the reels you have the option to tap the Double Up button. The Cyclops Monster then shakes up dice in his Smiley-face cup and determines your fate with an Even or Odd roll.

If one of the Monsters appears framed by a special rim and delivers a winning combination it unlocks the Long Lasting Wild Symbols feature. The framed symbol then flips to let you know for how many spins it will stick around as a Wild. More than one Long Lasting Wild can inhabit the room at one time for even larger rewards.

Three or more Bed symbols anywhere on the reels trigger a Spooky Second Screen Bonus round in which Jesse and Jane are given the chance to slay their demons. As the plucky kids pick off the monsters from their cards one at a time you collect until you hit the Parent Card when it is time to go to bed.

When the Mysterious Door symbol lurks on the middle position of the centre reel the Monster World Free Spins bonus is unveiled and you are off on an earnings spree during 12 free games where all payouts are doubled. Is anyone else ready for bed yet?