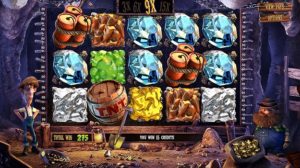 Betsoft Gaming has more than 50 3D narrative slot games in its catalogue and More Gold Diggin’ is the first one it turned to when it wanted to bring out a sequel. It returns you to the mismatched brothers Jebb and Cletus, the voluptuous Daisy and a rascally gopher out in the mines of the American West.

More Gold Diggin’ is a five-reel mobile slots game with discoveries to be unearthed along 25 paylines. Anyone can swing a pickaxe into these treasure troves with a minimum stake of just 0.02 coins. You’ll be working the same claim as there is no progressive jackpot but there are many bonuses along the way.

Betsoft has chosen to concentrate on the minerals in the mine rather than the rewards they can bring. The developer asserts that “special care” was taken in creating the symbols that fill the reels to specially create the look and explosion animation. So the gold, silver, copper and diamonds are obvious and oil is given a blackish sheen and gas a lime green globule of molecules. The TNT and Dynamite thus leap off the reels when they appear, making wins obvious when they arrive.

Despite the name the best find for Cletus and Jebb is the Diamond which pays 2500X your stake for five across an active payline. The Dynamite is the Wild and it will substitute for all other symbols to help make a winning combination but it does not pay out on its own. Look for the Dynamite only on Reels 2, 3 and 4.

The big draw of More Gold Diggin’ is the Cascade Multipliers which operate instead of spinning reels. Every time a winning combination is struck the scoring symbols explode and every symbol cascades down to form a new grid and a multiplier is added of 1X. This pattern continues until there is no win resulting from the exploding symbols. If you do manage to keep winning beyond five times, however, the multiplier will stop at 5X your stake.

The TNT Barrel is the Scatter and it carries with it 10 free spins when three or more arrive in the mine. During the bonus play the Cascade Multipliers are tripled to as high as 15X your initial wager.

The Gopher doesn’t have much to do except hop around but Daisy is on hand to deal some cards in a Gamble Feature after a win. If you pick the right card you double your winnings. If you lose it is back to mine with Jebb and Cletus to start digging all over again.