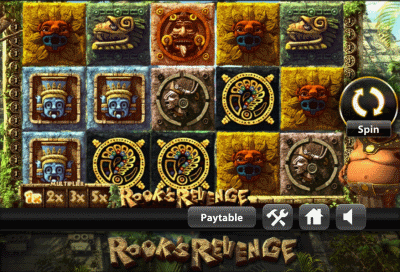 Rook’s Revenge is BetSoft’s contribution to the growing body of Aztec-themed mobile slots games. it also ups the stakes in the category with innovative game play and bonus features.

As for the nuts and bolts, this is a five-reel game with 25 paylines. There is no progressive jackpot and no traditional scatters but there is a possible in-game app reward of 12,500 coins. The game has no Autoplay option so Rook can take his time plotting out his schemes of revenge.

The game takes place deep in a Central American jungle sometime 600 years ago or so in the heart of the Aztec Empire. We follow the adventures of Rook, an Aztec chief who is agitated over some unexplained wrong. You are surrounded by stone carvings of Aztec animal symbols and masks. Thanks to the richly drawn graphics you can feel the humidity drip in the jungle, hear the pounding of distant drums and smell the burning flesh of human sacrifices offered to the vengeful gods. All the symbols in the game are the stone carvings and every time they explode in winnings a satisfied Rook is on hand to give a little leap of joy for their destruction. Those familiar with the online version of Rook’s Revenge will notice his celebratory glee has been toned down from the catalog of cartwheels and disco moves he employed there.

The quickly apparent feature of Rook’s Revenge is that it departs from the classic slot machine reels and instead explodes winning symbols to allow others to move into the positions. Each time you lay waste to the Aztec symbols in such fashion a grateful Rook adds a multiplier to your next game. He will continue to do so as long as you keep winning and destroying his enemies up to a multiplier of 5X, which is reached after four straight wins and stays intact until you lose. You can keep track of your multiplier with a small counter in the lower right hand corner of the game screen. During free spins this feature pays triple, up to the maximum of 15X.

Those free games are triggered by the appearance of a Golden Mask on Reels 1, 2 and 3 that form along an active win line. For the action Rook leads you through the valley to a colourful, water-drenched grotto where he conducts the free spins. Free games can be re-triggered during this feature.

The Wild symbol in Rock’s Revenge is a stylized Aztec interpretation of a question mark. It appears only on the three centre reels and substitutes for all symbols. As you scoop up your riches from doing Rook’s spiteful bidding and leave the jungle you realize that living well is truly the best revenge.