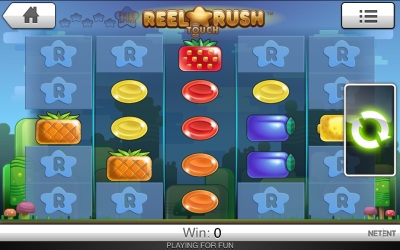 Reel Rush feels like a proper return to the old school. This possibly isn’t in terms of slots, but more to the retro gaming that many of us have grown up with. Some of the most memorable features of these older games come from sounds and this is where they are most recognisable. Unlike many mobile slots, Reel Rush has clearly worked extremely hard on the musical component and it’s this feature that really makes the slot as good as it is.

Unbelievably, Reel Rush has the potential to cover 5 reels and a staggering 3125 ways to win. On top of this, the slot includes a progressive re-spin game which in turn eventually gets you through to the free spins game where the top payout reaches almost £100,000.

Think Super Mario. Think Sonic The Hedgehog. Think Candy Crush. Then mix them all together and you will get something that resembles Reel Rush. The game includes the same sort of interactive tokens that you need to collect throughout all of those classics, whilst also including one of the best soundtracks and musical accompaniment of any mobile slot we have played on.

Graphically, the game looks stunning but it all works beautifully together to provide a gaming experience that will keep you glued to your mobile device whilst playing Reel Rush.

The wild symbols –Golden Star – are obviously something that will highly benefit you. These will unlock a lot of the temporarily closed off boxes that you will find initially on the game. We mentioned before that the paylines can reach a staggering 3125, but the normal game includes only 45 to start with.

The introduction of re-spins is something that’s seemingly being left out of more of the latest designs of mobile slots, but yet seems to work so well with Reel Rush. For every time you win, the board will be held and new amount of paylines will open up. By winning 5 times in a row, this will enable you to hit the free spins section which opens up every board and allows you to crack on with the 3125 paylines on offer. The amount of free spins will be 8 every time you enter the bonus round but will be working on the 5 by 5 board for maximum payout.

Overall, there are very few negative points about Reel Rush; in fact, we could go as far as saying that there are none! The game has a different approach than many, but the inclusion of a massive 3125 possible paylines is something that’s very rare. To couple all this with a soundtrack that’s going to send you right down memory lane, especially for you old school gamers out there, just brings this all together into a very appealing mobile slot indeed.