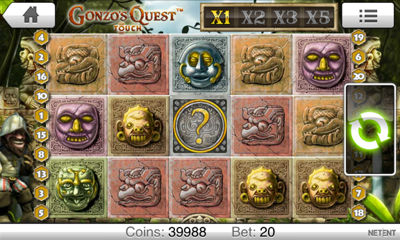 Gonzo’s Quest has rapidly turned into one of NetEnt’s most popular mobile slots. Since its release in 2011, this stunningly designed slot follows the quest of Gonzalo Pizzaro and his pursuit to find the lost gold of Eldorado. The slot contains a 5 reel, 20 payline format along with the increasingly popular avalanche feature that is proving more and more desirable within mobile slots.

Special features from the slot include 3D graphics, avalanche win system, free fall feature, wild substitution and a multiplier for each winning avalanche.

The game starts with Gonzo, a feisty Spaniard, and his quest to find the lost gold of Eldorado. The theme continues with Gonzo throughout the game, but for those of you familiar with the desktop series, will see a notable change on mobile, none more so than the fact that you don’t get him bobbing his head on screen every couple of minutes for no apparent reason.

The graphics on the mobile device look really solid without ever being mind-blowing. But the longevity of the game is really quite good, even with the subdued nature of the bonus rounds.

The standout feature on Gonzo’s Quest is probably the inclusion of the avalanche win system. The removal and addition of new rocks really increases the usability with the slot, when even what at first appear as ‘losing’ spins, crashing and changing into potentially winning spins. There are downsides to this though, in the lack of free spins that you can earn, but it does increase your chances of hitting the bonus rounds, of which are essentially where you money is made.

To trigger the bonus game you must first get three bonus symbols matching on one line, not scattered! What’s interesting about the bonus game is that it plays out pretty much the same way as a regular spin, apart from it having a multiplier of 3x and works up to 5x. Whilst this isn’t a massive amount by any means, it does mean that its pay-out of around 96% is a steady amount and will result in a game that will keep you ticking over, rather than be as volatile as some.

Whilst the graphics are definitely going to be on the higher side of the mobile slots industry, the game possibly doesn’t include as much substance as style. As we mentioned, Gonzo’s quest is going to be a low-volatile game, but we can’t help but think that whilst their bonus frequency hit rate is 54% and main game frequency is 41%, the game could have been made a little bit more edgy, if only to entice a wider range of players. Simply the inclusion of a larger multiplier or even a higher pay-out and lower hit frequency would attract those big pay days more often.