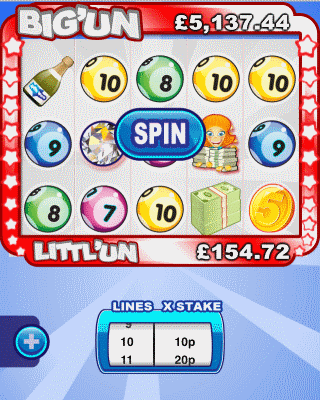 There is some evidence that the Chinese Han Dynasty used lotteries to help finance the building of the Great Wall of China two hundred years before the birth of Christ. The Romans enjoyed random ticket pulling as amusements at dinner parties. Queen Elizabeth I chartered the first official lottery in England in 1566 and private lotteries were held to help raise money for explorations of the New World, including the first permanent settlement in America, Jamestown. Good things can come from lotteries and so you will hope in Loopy Lotto, a mobile slots game from Probability.

Loopy Lotto is a five-reel game that pays out along 50 paylines. Lottery entry is a bit steep at .10 units and the maximum wager on any line is 1.00 unit for a potential spin of 50 units. Autospin and Max Bet options are available which is convenient with up to 50 lines at stake. There is not one but two progressive jackpots to be chased in this Loopy Lotto.

Probability has built Loopy Lotto around your chances of winning the lottery. While a punter’s chance in a typical number lottery is stacked thousands and even millions to one against a slot player expects no worse than the 92 percent return offered in mobile slots play. But that is why this lotto is so darn loopy.

It really gets loopy when the reels start spinning and the graphic symbols – Champagne bottles, piles of cash and diamonds – are not the big scorers. Those are reserved for the numbered lotto balls that normally bring only minor elation. Here the 7, 8, 9 and 10 balls can return up to 750X your stake if five Number Nines line up, much as they do on any televised lottery drawing.

Loopy Lotto offers not one but two progressive jackpots, the Big ‘Un, and the Litt ‘Un. They are won when five Loopy Lotto Logos line up on an active payline for the Big ‘Un or four for the Litt ‘Un. The Big ‘Un is typically built into the thousands and within two weeks of the game’s release returned over £600,000 to a lucky player. The Litt ‘Un normally hovers in the hundreds of pounds.

The Lucky Bloke is willing to scatter his luck around as he will deliver Free Spins when three or more appear on the reels. During bonus play random multipliers can award up to 10X your wins. This is one lotto you can expect to walk away with some actually prizes at the end of the day.