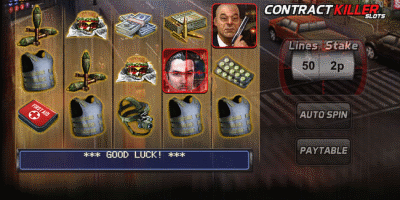 It could be a bit of a grim slog with Contract Killer but Probability has injected a bit of humour into the proceedings of its mobile slots game. That hamburger certainly looks appetizing.

Contract Killer is a five reel game with 50 ways to win. You can pull the trigger on this manhunt with just 0.01 units and keep feeding the metre up to 1.00 unit per line. There is no progressive jackpot but an in-game potential return of 1000X your line stake.

Contract Killer gives us a steely-eyed assassin and a slick-haired Victim in his crosshairs. The setting is a dark city street. This could be going down in your town. The Contract Killer is outfitted with a handgun, a box of bullets, grenades, dynamite – your typical tools of the trade. The Victim has a double hamburger and a package of antacid pills. if the Contract Killer does not get him his diet surely will. He also has a bulletproof vest and a first aid kit if the killer botches the job. The soundtrack offers a mix of gun shots alternating with coins dropping into the tray.

The minor playing card symbols have been excused from this drama so the reels are stuffed with the elements of a Contract Killer on the job. All the killing paraphernalia pays off on the paytable.

The Contract Killer is Wild and he will substitute for all other symbols in creating winning combinations. But he will not give you any extra for his time. However he does pay that 1000X jackpot if he surfaces on all five reels.

The Victim is the Scatter, appropriately trying to dodge the assassin’s bullet. If he comes out of hiding on three, four or even all five reels the Victim activates three, six or nine free spins respectively that make it even more likely his body parts will end up scattered. All prizes during the free spins are tripled and the bonus may-be re-triggered as well. The Contract Killer may succeed and walk away with the Pile of Cash but either way you get the coins.