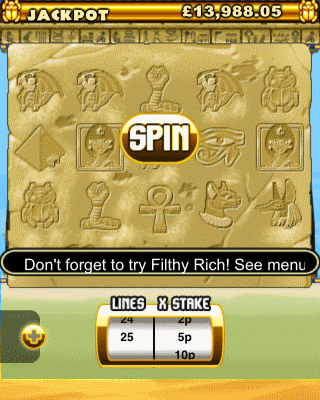 Do you realise that if you gathered all the gold ever found on the planet and put it in one place it would not fill two Olympic-sized swimming pools? But you would never know it judging by the number of slot developers who bring out games based on ancient Egypt and its treasure-hungry rulers. Pharaoh’s Fortunes are Probability’s offering. Gold mining in Upper Egypt spanned 1,500 years and was accomplished by setting fire to rocks to crack open the ore-containing limestone. The Egyptians were able to mine enough high-grade gold that they were able to sustain their empire with gold rather than military conquest. May you be so lucky when the reels start to spin.

Pharaoh’s Fortunes is a five-reel mobile slots game with 25 paylines. Wagering can take place at any level from 0.10 coins to 1.00 coin per line for a maximum play of 25.00 coins. The top prize on the Nile River is a progressive jackpot that builds with a tiny sliver from all the Pharaoh’s Fortunes players until it is won. Auto Play and Max Bet options are available to tap.

If it is possible to reduce an entire civilisation to a handful of symbols then these are Egypt’s: Mummy, Scarab Beetle, Pyramid, Sphinx, Ankh Cross, Anubis Jackal, Horus Bird, Egyptian Cat and coiled Asp. If you took a roll call they would all be here. And out of all the symbols the highest scorer is the Date Palm, cultivated for its sweet fruit and date wine. In Pharaoh’s Fortunes that Date Palm will start paying 5X with just two of them but an entire oasis of five will return 500X your stake.

The Mummy, a very much alive fellow from the great beyond, is the Wild in Pharaoh’s Fortunes. He can substitute for any of the other paying symbols to create win combinations. Five bandage-wrapped Mummies will return 250X your wager.

The bejewelled Cleopatra plays the role of Scatter and she will trigger a Free Spins round of five free games anytime she appears three, four or five times. She will not make any more favours during the bonus play so five is all you get but the prizes are massaged with a multiplier of 2X, 3X, 5X or a mighty 10X – that means those Date Palms have the potential to fill your bank with 5000X your bet.

And do not forget about that progressive jackpot that is building atop the Tuscan columns with every spin in the Pharaoh’s Fortunes universe. It is won by five Sphinx icons, anything less and the Sphinx is just another pretty gold-plated face. Now if you can just figure out what all those hieroglyphics on the screen are telling you.