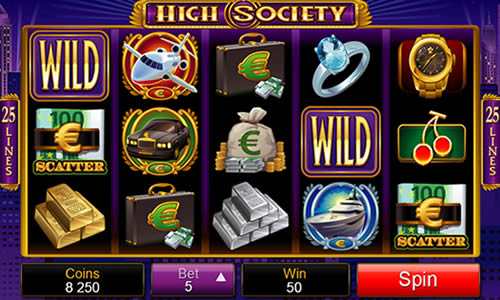 Bing Crosby, Grace Kelly, Frank Sinatra and Cole Porter showed the world what class was in High Society in the 1956 American musical comedy. It was Kelly’s last performance before moving on to become Princess of Monaco. Anyone who was a fan of that High Society world may be a little taken back by Microgaming’s version in its 2014 mobile slots game.

High Society is a five-reel slot that dances along 25 paylines. You can start the festivities with as little as 0.01 coins. There is no progressive jackpot to be had in this world of privilege. There is an Auto Play option that can be engaged if there are no servants around to tap the spin button.

If you were looking for tuxedos and ball gowns and Cole Porter tunes streaming out of grand pianos that is not High Society, circa 21st century. It is hard to picture Grace Kelly ever handling a pound note let alone carrying around suitcases and canvas sacks stuffed with pound notes as you get here. The bling like oversized diamond rings and gold watches are the type of ostentatious gaudiness that would be frowned on in most upper crust get together. The stacks of silver and gold bars are things that are out of sight in government vaults. The gold-plated Bentley and the monster yacht are barely acceptable but the jet plane is the plaything of too rich businessmen – old money is not in a hurry.

It is the Money Clip instead that will satisfy your aspirations to social climbing. When three, four, or five of the Money Clips grace any part of the reels you have a decision to make – and it is not how much money to leave the cat in your will. You pick between two bonus features:

The Super Wild Reels will bring you 10, 15 or 20 free spins depending on how many Money Clips were involved in that trigger. Before each spin one, two or three reels will go completely wild. In addition if that Money Clip lands on both Reels 1 and 5 you will get ten more free spins. Just a Money Clip on either of those reels will turn that reel wild as well. You are going to need to engage your accountant to figure out all those wins.

But you may not even want to give Super Wild Reels a go because you can opt for the Super Multiplier. This is a ten-spin bonus where you start with a multiplier of 2X, 3X or 5X, again depending on how many Money Clips were involved in the original trigger. The multiplier will increase by 1X every time the Money Clip appears on both Reel 1 or Reel 5 and if the Money Clip stops on both those reels it awards ten more spins. With all that money who needs any class.