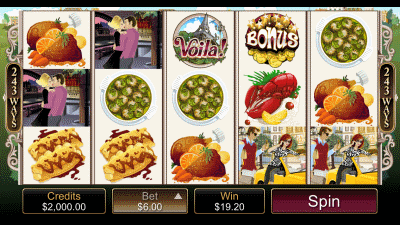 The English translation of the French contraction meaning “see there” can take many forms. It can be the reveal of a magic trick or the denouement of a murder mystery. In the Voila! mobile slots game from Microgaming it is just an excuse to get you to Paris for a romantic adventure.

This is a five-reel slots game with 243 ways to win by gathering adjacent symbols from left to right. There is no progressive jackpot but with a bountiful betting range and copious amounts of free spins Voila! offers a jackpot of 60,000 coins. Now that’s the language of love.

Voila! is all about the romance. The playing cards or fruits that often do duty as minor symbols are nowhere in evidence as they have been replaced by sumptuous French foods – lobsters, fancy pastries, baguettes, rich cheeses – so nothing intrudes on the mood that has been so painstakingly planned by the conspirators of love. Our lovers spend their time strolling arm in arm on cobbled Paris streets, languishing in sidewalk cafes, building love nests in swanky hotels, and kissing by Seine. Accordion music fills the romance-charged days and nights.

There is never anything routine about romance in the City of Lights but nothing in playing Voila! will be unfamiliar to seasoned mobile slot players. The bonus symbol is a pile of Gold Coins. A little off the romance theme perhaps but nights like this don’t come cheap. When three, four or five Gold Coin piles land on the streets of Paris twenty Free Spins are awarded. During Free Spins all awards are doubled and they can be re-triggered when more stashes of Gold Coins are discovered.

The Eiffel Tower-infused Logo is your Wild in Voila!, standing in for any symbol and ready to up the stakes on your romantic night with random multipliers that can double, triple or quadruple your bank so this magical night does not end prematurely.

There is also a Gamble Feature where with the turn of a card you can double or quadruple your winnings, which can start as high as 120 times the minimum stake. And continue to risk it all until you have reached the win limit or struck out for the night. Because really, who is not ready to take a chance on love?