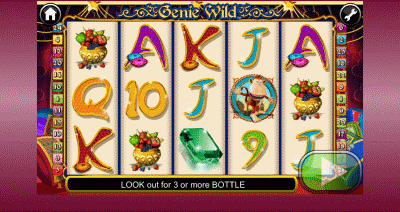 Quickfire Gaming, a minor star in the Microgaming constellation, takes on the magic genie in a bottle genre in this mobile slots game and tosses aside its Arabian origins and instead pays homage to the 1960s American television series, I Dream of Jeannie. You get a curvaceous young blonde woman and a bottle in place of the hulking black-haired man and a lamp.

Genie Wild is a five-reel game with payouts on up to 25 lines. You can bet from 0.01 coins to 0.25 coins per line. There is no progressive jackpot but the top in-game win is 5000X your stake.

Genie Wild recreates series star Barbara Eden’s pillow-studded home inside the magic bottle as the setting for its mobile slots game. The only characters are the very blonde Genie, as in the televisions show’s imagining, and a human-chimpanzee hybrid that may be referencing the opening episode of Season 3 when Jeannie’s astronaut-slash-master-slash-lover Tony was inadvertently turned into a chimp that was about to be shot into space. Anyway, that’s it for any character development. The other symbols are the run-of-the-mill treasure chest, gold pots and multi-faceted aquamarine jewels. The minor symbols are your standard playing cards. Even the theme song tooting in the background is a riff on the television show where a woman’s only purpose in life was to serve her master.

All the power in this game belongs to just two symbols – Genie, as the Wild, and her Magic Bottle, as the Scatter. When Genie is out and about in the basic game she replaces all other symbols and magically creates winning combinations. If you see her five times you win the game’s top jackpot. Pretty ordinary stuff.

But it is when Genie is released from her bottle woman-cave that her full range of unearthly powers are realised. Three Magic Bottles trigger a Free Spins Bonus during which Genie will show up from time to time in full form rather than just a head profile. To do this she must occupy the entire reel, turning it completely wild. And she may inhabit more than one reel in a spin.

During this display Quickfire obviously has no qualms about showing the golden-haired beauty’s belly button which American censors would never allow on the original television show. Jeannie’s bare midriff always had to be shrouded in some veil or another. So while you are navel-gazing and trying to keep up with the big wins from the Expanded Wilds you may not notice that your bonus play expires after ten exciting spins and there is no re-triggering and no multipliers.

As long as you are relying on the good fortune sent your way by a Genie you may as well engage in the Gamble feature where after any win you can risk all to double or quadruple your win on the turn of a card by picking the correct colour or suit. My all your wishes come true.