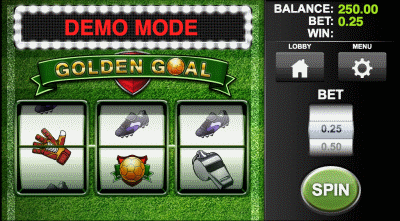 Golden Goal is another of Play’n Go’s progressive Vegas-style mobile slot machines. Hopefully you will find the money the developers saved by using clip-art graphics hidden in those jackpots.

This is a three-reel, single payline mobile slots games. There are no bonus games to bother with, no free spins to distract you. Just keep your eye on the prize and collect that progressive jackpot.

Play’n Go has set the action against a generic artificial football pitch. There are only four symbols to concern yourself with and the pay table can me memorised in the first few spins. Those symbols are: cleats, an official’s whistle, goalie gloves and the golden soccer ball. Any more icons and they would have needed to find clip-art of sweaty socks and soiled headbands.

Of the three minor symbols the Glove is far and away the most desirable, scoring five times as many coins as the Cleat or Whistle. You can also kick in a few coins by having each piece of equipment align on the win line.

The Golden Ball bounces around the pitch as the Wild. It will substitute for the other symbols and help produce winning combinations but won’t increase your payout. If the Golden Ball just appear on the payline once or twice it also returns a few coins. But if it the Golden Ball should roll around onto the payline three time you can start yelling Goalllll!!!! because you have won the progressive jackpot.

As per usual the only way to have a go at the big prize is by playing the maximum number of coins, which in this case is set at three 0.25 units per spin. Play’n Go has married The Beautiful Game with another beautiful game.