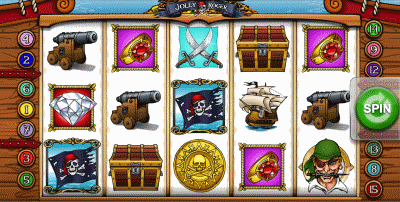 Play’n Go sets sail for high seas adventure with this pirate-themed mobile slots game. The Swedish developer has appropriated the British pirate flag of the Jolly Roger but apparently the skull and crossbones translates into any language.

This is a five-reel slots adventure that pays rewards on 15 pay lines. There is no progressive jackpot but an in-game bonus can return 1250X your stake. Autoplay and Bet Max options are available to get you to the end of the plank that much quicker.

The setting is a wooden pirate ship of yore and everything you need to know is printed on the back of parchments containing directions to hidden treasure. These brutes have done away with the minor playing card symbols and replaced them with razor sharp cutlasses, cannons, multi-masted sailing ships and bandana-wrapped buccaneers so you are fully immersed in their outlaw world as the reels spin. The higher paying icons are the booty most dear to the pirate- gold doubloons, jewelled rings and big, sparking diamonds.

There are bonus games Jolly Rogers plays on board ship but this crew is not giving away any free spins to landlubbers.  The Pirate with the tri-corner hat is the Scatter and he pays anytime two or more land anywhere on the reels. The tattered Jolly Roger flag is the Wild and the icon doubles all wins while substituting for all the symbols except the Treasure Chest, Map Pieces and the Parrot.

When three Map Pieces come together on an active payline to form a complete treasure map on Reels 1, 2 and 3 the map is revealed to have burial locations marked on it with Xs. Pick three of the treasure spots to reveal how much loot you have purloined from the pirates.

The Treasure Chest Bonus is more of the same. When three locked boxes arrive anywhere on the reels you are directed to a passel of chests that have been filled from a pile of gold. You can pick two to take home with you. Maybe these high seas bandits were not so fearsome after all.