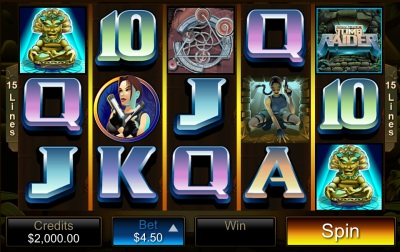 It’s been almost 20 years – unbelievably – since the first Tomb Raider game was brought on to our screens and since then the franchise has gone from strength to strength. In more recent times, this slot has been on the most popular online and we are delighted to report that its transition to the mobile format has been a successful one.

The slot brings you to the standard 5 reel experience but rather surprisingly Microgaming have decided to include just 15 maximum paylines to one of its figurehead slots. On top of that the highest possible jackpot rings at a lonely 7,500 coins but it does include a host of scatters, wilds, free spins and a pick and choose bonus game.

Tomb Raider once again follows the adventures of Lara Croft as she ones again tries to do her best to not only avoid being caught but also to stop those damned bad guys from getting their grubby mitts on her treasure. Unfortunately there are no trap doors, hidden switches or even glitch graphics within this slot, although the latter is definitely a positive omission.

Looks wise, the game is stunning and even though they have diced to include a fairly large amount of number symbols, it doesn’t really take anything away from it in terms of design.

You’re going to want to keep an eye out for the Lara Croft portrait which is your free spins log and probably the best chance you have of reaching that pretty low jackpot amount. You will need to collect three or more before being given 10 free spins with a 3x multiplier to boot. It is worth noting though that these can be retriggered and even within just half an hours play, we had two free spins games that were both retriggered. We aren’t sure the maximum possible, but anything with 30 or more free spins is certainly going to give you a nice bankroll booster.

The wild symbols are quite simply the tomb Raider log and whilst these work with any of the symbols apart from the scatter, they actually hold monetary value as well. Collect up to five of these little beauties to earn the 7,500 coin jackpot.

Finally, the pick and choose game is trigged by getting four or more of the Egyptian tomb and will allow you to pick four of the 15 icons on screen. These will act as multipliers to your bet amount, and will range between 2x and 20x, although it’s likely it will fall somewhere middle of these numbers.