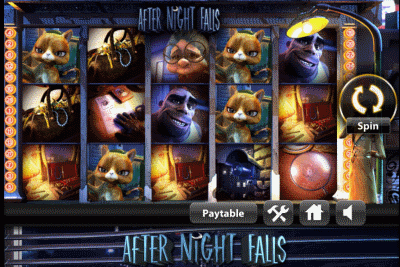 In the eternal struggle between good and evil After Night Falls from BetSoft Gaming gives you the chance to try on both roles. There is so much going on in this mobile slots game you may get confused which side is which.

This is a five-reel game with 30 paylines. There are no progressive jackpots and the best you can hope to do is a scrawny jackpot of 1250 coins which may scare away high rollers. But with a house edge less than three percent and five bonus games there is more than enough action to satisfy most players.

After Night Falls is a riff on Peter Sellers and the Pink Panther movies, right down to an inquisitive soundtrack and the animated French detective, Inspector Rousseau, who is on the trail of a cat burglar, or a burglar with a cat. In addition to the felonious feline the thief is loaded down with pilfered televisions, purloined jewellery and bags of swag. There are security cameras and magnifying glasses to assist the investigation. The story is told with stand-out three dimensional graphics and punctuated with animated characters.

There is plenty to be investigated in After Night Falls. Many clues are revealed under the Magnifying Glass, the Wild for this crime-busting caper. In the Magnifying Glass Bonus the Wild generates free spins and after each is completed moves stealthily one reel to the left, generating ever greater rewards, until it reaches Reel 1 and disappears.

Rousseau also uncovers clues at his Desk, which is the Scatter. Three or more Desks trigger another round of free spins that are teamed with a multiplier up to 10X. When three or more Desks appear on the same reel they may collapse into a single symbol, spilling out even more awards.

The kindly grey-haired grandmother may also hold the key to the case. Seems her apartment has been broken into as well. If she shows up three or more times on a payline you get to go to the crime scene with Rousseau to poke around and uncover evidence worth a few credits.

While the bow-tied Rousseau is sniffing about you also can assume the guise of the beefy burglar. Three or more Thief symbols send you off to an apartment building floor with five wooden doors. Each one you successfully direct the Thief to break into enables you to plunder more credits until you hit “Collect” and it is time to scram before Rousseau arrives.

When a case is this tough sometimes all you can do After Night Falls is flip a coin. After any win you have the option of joining Rousseau in his office as he surveys the darkened city through a louvered window. Call “Heads” or “Tails” to see if you collect.

This case has gotten so complicated that you have forgotten there is no great reward in its solving, just a lot of little ones to satisfy coin-tracking sleuths.