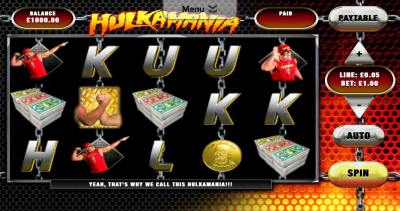 Endemol funnels all the pageantry and pomposity of professional wrestling from the heyday of the 1980s into its mobile slots game, Hulkamania. Ringed combat is a tried and true theme for game developers but mobile phones weren’t even a thing when slots game hero Hulk Hogan ruled the wrestling world.

This is a five-reel, 20-payline game. There is no progressive jackpot but plenty of opportunities to bring the app to its knees begging for mercy with free spins and a bonus game.

Only two men have ever held the World Wrestling Federation championship longer than Hulk Hogan and the trappings of his glorious career are here to admire. The game is awash in the red and yellow hues that were the trademark of the Hulkster. Or should we say gold? There is a pile of gold bars, the title belt is rendered in gold, there is an offical gold coin from the Republic of Hulkamania, and Hulk himself – flashing his steroid-enhanced guns – is draped in gold at times. The great champion himself, still in the wrestling ring past the age of 60 – delivers the introduction to play and in case you don’t land enough symbols with Hulk in various poses to remember who this game is all about the lesser-paying symbols are H, U, L, and K.

An Arm Wrestling symbol performs as the scatter and if you round up three on the inner reels you have a chance to test strength with Hulk Hogan himself. You choose your moves by tapping a button and the better you acquit yourself in competition the more free spins – up to 15 – come your way. Pay combinations are doubled during the Arm Wrestling Bonus.

A powerful Hulk does duty as the game’s wild symbol. The highest win is paid in the event of multiple wins due to the champion’s rule over the symbols he replaces. Normally Hulk is attired in his red wrestling singlet but if he ever shows up decked out in gold on Reel 3 four other symbols at random become wild. This money generator can also occur in free spins.

If three Championship Belts land on Reels 1, 3 and 5 you are on your way to the Big Fight Bonus. Here you are on Hulk’s side, tag-teaming a menacing opponent. The spinning wheel choreographs moves for both the combatants and your cash bonus depends on the outcome in the ring.

If all the tussling with the Hulkster wears you out you can use the Auto Spin feature to go as many as 25 rounds in Hulkamania in your stead.