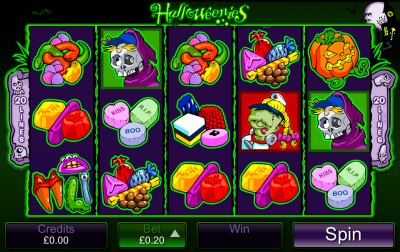 Halloweenies is an interesting slot brought to you by the software provider Microgaming. Whilst this slot is based around Halloween, it has a bit of childlike theme to it, rather than the scary ghouls that you would associate with the time of year.

The game includes a pretty standard 20 payline, 5 reel slot and has an excellent return to player rate of around 96%. What Halloweenies will provide is a low volatile mobile slot and also a reasonable number of feature rounds that include free spins, wilds and scatter symbols.

The Halloweenies follows the colourful world of Halloween themed symbols, although not as you might expect. They include things such as sweets, goofy costumes and even random pink bunnies, although we aren’t quite sure what there relevance is in the game to be honest. That being said, it’s actually a really bright, fun looking game but it’s almost as if it’s designed for children, which is interesting as they obviously won’t be allowed to play it.

The wild symbols are probably the best place to start within the features section. They are represented by what looks to be monster sweets and will work along any payline. They appear a lot more frequently than most games, which you would expect for a game with a high payout and volatility.

The pumpkins are where you will start to really make some money from the game. The more they appear from 3 upwards, the more you items you will be able to choose from the pick and play bonus round. The game will include about 15 or so objects to select from and each will include a multiplier of your bet amount. These range quite a bit between them, but expect to see around the 10x to 20x for each, making it a nice little earner indeed. Also, you will hit this feature a lot more times than you might think, which really adds to the depth of the game.

The final feature comes in the form of your free spins and for this you will need to get three or more of the bunny that we mentioned earlier. Once in you get 13 spins automatically but you can activate wilds throughout these spins which will remain with you for the majority of your play, although it seems to be pretty random to say the least. The inclusion of re-spins means that there will be times where you get multiple goes on the free spins feature meaning that the initial 13 spins can be double or even trebled making it extremely lucrative.