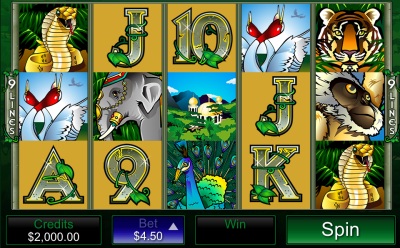 Adventure palace takes you through an enchanted jungle meeting a host of different species of wildlife. It’s a pretty simple theme in all honesty and not massively imaginative, but did find it strangely addictive over an extended period of time.

This slot falls into Microgaming’s ‘middle of the road’ category if ever there was one. It provides a 5 reel 9 payline overlay and includes a bettering range of between 0.09 coins and 45 coins. Rather impressively it does include a few features in terms of free spins, multipliers, wilds, scatters and decent jackpot of 10,000 coins.

We aren’t going to harp on about the theme for too long as, in all honesty, there’s not an awful lot going on. It’s a jungle them which has probably been a thousand times before, but that’s not to say that there’s anything wrong with the slot. In fact, it looks quite nice with symbols that include snakes, elephants, tigers, monkeys and peacocks (!?). These are all fine, but just a little unimaginative if you ask us.

The bulk of the game will be situated around the free spins bonus of which to get in you will need too collect three or more of the scatters. The scatter symbols look like landscape pictures of the jungle, but they aren’t the easiest to make out. Usually we aren’t one who particular enjoys the massive scatter symbols being plastered with text, but in this instance it could have worked rather well. You get a nice little 3 times multiplier with your winnings and it’s also possible to pick up a retrigger of the free spins, so the relatively low number of 15 could actually be much higher than that. One thing we will say is that in the three or four times we have been on the free spins we haven’t actually managed to trigger the retrigger.

Finally, like the majority of these games which seem to have limited number of features and just generally not an awful lot going on, you get a nice jackpot of 10,000 to keep you interested, which will spic up any mobile slot. This accompanied with the obligatory pick and play game form Microgaming actually makes it a rather decent slot after all.