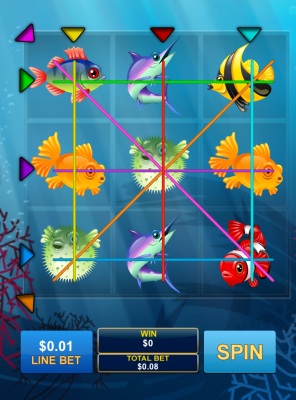 The Fish-O-Rama mobile slot is another from PlayTech’s more classic range. Its simplicity personified and reminds us very much of the early slots that were found online before the integration of video slots. But this fish based slot has more to it than that, it’s well designed, graphically sound and it has a surprising amount of longevity, even for those who aren’t keen on fish!

As we said, it’s a classic slot adopted PlayTech’s now infamous 3 reel, 8 payline structure. It works really well for what it is but its lack of bonus rounds and features will prevent this slot from being anything more than simply ‘simple’.

In a word, the theme is all about fish. Or to be a bit more informative sea life! You are greeted with an underwater world, a little like a fish tank, some might say and from there you will be greeted with over 8 different species of fish all of which having different values. What we like about this game is that they have completely removed the numbers, of which we are seeing more and more of in the newer designs, and simply made all them all into characters.

The first thing you need to look out for is your scatter symbol, which just so happens to be the swordfish in Fish-O-Rama. This will work along any payline and will include multiple paylines should it need to. On a 3×3 grid this actually works out to be very handy due to the decreased amount of combinations there are. They actually appear more regularly than you might think as well, proving to be a useful little addition to the game.

The main aim of Fish-O-Rama is undoubtedly to hit the jackpot which will result in 1000x your initial bet. Bearing in mind that maximum bet per spin is 8 coins, will result in a jackpot of 8,000 coins, potentially. To activate this you will need to pull up three sharks on any active payline.

Reading through this review might put a lot of people of playing it, if only for the lack of features. But this slot is designed to be simple and aimed at players who don’t want to have to work out the endless combinations needed on some of the larger 5 reel games that are on offer. It may be a little cliché, but Fish-O-Rama is what it is; a simple slot that has great graphics and a surprisingly large amount of longevity.