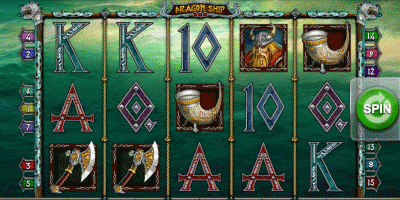 The Viking longboats have been called the apex of artistic and technical achievement during the European dark ages. These versatile vessels could draft in as little as 20 inches of water to navigate trading routes along the Scandinavian coasts and yet were still powerful enough to take on long ocean journeys. The Swedish developer Play’n Go has done its Scandinavian ancestors proud with its rendition of Dragon Ship.

This is a five-reel mobile slots game that pays out on 15 lines. Coin play ranges from 0.01 to 0.25 coins per line. The Vikings have no time to chase progressive jackpots.

You are on the high seas going full-bore on a Viking expedition. The transparent reels insure that the gorgeous but temperamental blue-green waters over the bow of the ship are always in view. On board are a Viking captain, a ceremonial drinking horn and an array of decorative shields and axes should trouble arise. The minor playing card symbols are presented in archaic elegance. An invigorating score urges the Dragon Ship onward, ever onward.

The Viking is the big scorer on this voyage. He is obligated to part with 2,500X when he shows up five times on a payline. The Fiery-Eyed Dragon Masthead is the imposing Wild – all other symbols willingly accept his substitution to create wins, except for the Treasure Chest Scatters. As is the Viking way, all wins can immediately be gambled all or nothing – picking the right colour card doubles your win or the right guess on the card suit quadruples it. You can repeat the bet up to five times or a total of 2,500 coins.

When three Treasure Chest Scatters float onto the reels you are led into the galley of the Dragon Boat for a quick game of Pick Me. Select one of the three chests and it will burst open, spilling gold coins into your bank.

The Fiery-Eyed Dragon Masthead Wild is stacked on Reels 1 and 5. When they both appear a lucrative Free Spins round is triggered. Suddenly the Dragon Boat appears in silhouette during choppy night-time seas. The entire first and fifth reel have turned into the head and tail of the flame-breathing dragon and they will remain fully Wild for 15 very profitable Free Spins from this Viking raid.