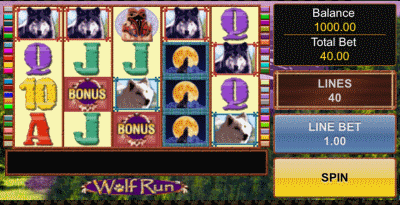 Wolves are among nature’s most effective hunters which enable them to survive in the harsh climates of the arctic north. That makes them tried and true symbols for slots games where the hunt for riches is every bit as difficult. This wolf-themed version is from IGT and will readily be recognized by veterans of Vegas casinos.

This mobile game is a five-reel spinner that pays out on 40 lines. The main quarry is free spins with a potential return of 1000X your stake. An Autoplay option will free you to keep up with the wolf pack on this hunt. There is no progressive jackpot.

Wolf Run focuses not only on the nobility of the wolf pack in the wild but also on the impact the proud canines have had on the native peoples of North America. There are totem carvings dedicated to this formidable predator that is often associated with danger and destruction in folklore. Even the minor playing card symbols appear to have been carved from wood and sport nicks along the edges. Our wolf pack consists of one white wolf, one black wolf and another howling at the moon. Our setting is the rugged snow-draped Rocky Mountains.

As befits any tight-knit, successful wolf pack the big attraction of Wolf Run is the stacked Wilds, represented by that Howling Wolf. These wolves run together on the same reels and bring down bigger game than any single Wild could do on its own. Four or more hunt on the same reel. The bounty is especially impressive as the Howling Wolf Wilds gather even more in bonus games.

The Scatter is a Native American dream catcher amulet fashioned in a circle from a willow reed. When combined with the Wolf the jewellery is said to ward off evil and protect the wearer from bad dreams. Certainly in Wolf Run it brings good fortune indeed – five free spins if the Dream Catcher Bonus symbol arrives three times on Reels 2, 3 and 4. You may scoff at the small game your hunt has uncovered – only five spins. But the wolves are attracted to the Dream Catcher and the Wilds appear in greater numbers during the free spins. Since the Dream Catcher Bonus re-triggers you may earn as many as 255 free spins. And after each win you get the piercing howl of the wolf. Hook up with the right wolf pack and there may not be any sleep for anyone tonight.