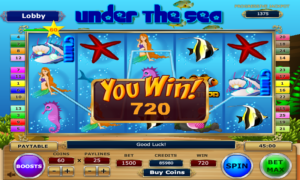 If mermaids do not exist why did the United States National Ocean Service feel compelled in 2012 to issue a statement that no evidence of mermaids has ever been found. But after all, absence of evidence is no evidence of absence. And from all evidence in Under The Sea, the 2014 mobile slots game from Betsoft Gaming, you will become a believer.

Under The Sea is a five-reel slots game with prizes swimming along 30 paylines. Any level of punter can paddle in this ocean with a minimum wager of just 0.02 coins but those hunting for real underwater treasure will want to tap the Max Spin option that makes wagering as easy as falling overboard.

When your are a software developer whose stock in trade is 3D graphics and beautiful slots like Betsoft Gaming the lure of the sea will be ever so powerful. And Betsoft has emptied the colour palette in creating its underwater coral reef around a sunken galleon whose treasure is guarded by a mermaid. Sensuous curves abound from the undulating fronds of kelp to the impossibly wide-eyed blonde mermaid. The denizens of the deep, from the clownfish to the starfish to the sharp-eyed shark, are an especially vibrant and toothy lot. The treasure chest spends a lot of time opening to let you know what is waiting Under The Sea. A gurgling soundtrack seems to have recorded at water’s edge itself.

The Mermaid is the star of the pay table with a 2000X multiplier of your bet. Wins are announced by the six animated fishes swimming happily in your direction.

The flawless Pearl shining out from its oyster host is the Wild and it substitutes for all symbols except the sunken Ship that is the Scatter. The Wild in Under The Sea delivers multipliers – 2X, 4X, or 8X your line bet depending on if one, two or three perfect Pearls are involved in cementing the winning combination.

Three Chest symbols will trigger the Bonus Round. Find the treasure Under The Sea by picking from six treasure chests to earn credits. Now that is no fish story.