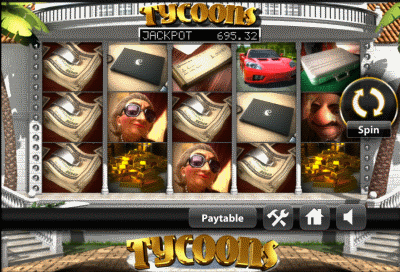 Tycoons is Betsoft Gaming’s look at the high life through the eyes of four stereotypical rich types: the Internet geek, the Arabian oil sheik, the British heiress, and the self-satisfied businessman. Their antics are bought to life in cinematic 3D style as is the Betsoft way.

This is a five-reel mobile slots game with 30 ways for the Tycoons to part with some of their cash. Minimum bets start at 0.02 units and rise to 1.00 unit with a maximum line bet of 150. As befitting a world of tycoons there is an ever accumulating progressive jackpot to be claimed.

The setting is the Spanish Colonial-styled Billionaires Club where four tycoons have gathered to flaunt their wealth. After each time one of them produces a win we are briefly treated to a peek at the tycoons doing what they love best – the Internet guy opens his computer, the heiress takes an over-stated puff from her cigarette holder, the businessman closes a deal and the Arab oil guy just struts.

Let’s get the small money out of the way up front. The The minor playing card symbols have all been jettisoned for symbols of wealth – fast cars, check books, champagne and plump bankrolls. When they do payoff you get to see them briefly in action, checks getting written, hot red cars being driven and sparkling wine being poured. If you are wondering what tycoon is valued most in Betsoft’s world it is the Internet guy who pays as much as 500X, then the heiress at 300X, the oil sheik at 200X and the business man at 150X.

There are several ways you can advance your bank enough to join the ranks of Tycoons. The Free Spins bonus is not triggered by the appearance of a triplicate symbol in the usual manner. Instead there are golden “fs” letters branding random Tycoons through the spins. When one of those is part of a winning combination or shows up three or more times the Free Spins activate with enriched reels as the triggering Tycoon becomes an expanded Wild blanketing the entire reel. You then receive at least three spins to gather up as much wealth from this advantageous position as possible.

If the Pile Of Gold, Checkbook or Bankroll symbols all line-up consecutively on Reels 1, 2 and 3 you then get your choice of one of the riches in a Pick Me Bonus.

When three or more Dealer symbols arrive you are escorted to the card room of the Billionaire’s Club where our quartet of tycoons is playing a little poker. You pick who you think will win the hand and collect an instant win if your one-four call is correct.

Tycoons like nothing better than getting rich off other people’s money and you can do the same with the Progressive Jackpot that is kept tabs of at the top of the screen. Of course it takes money to make money so you will only have a grab at the big money if you are playing Max Bet. Get five Metal Briefcases on an active payline and collect the bounty. And you too can strut your stuff in the Billionaire’s Club.