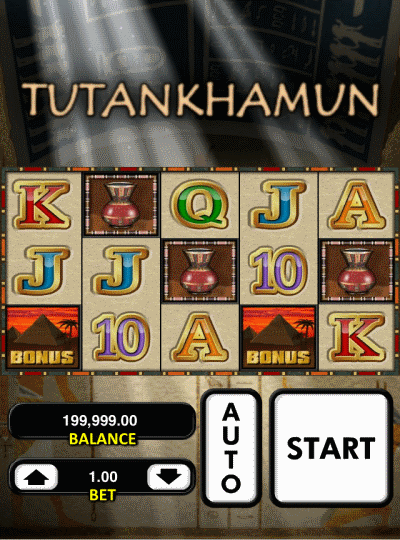 To represent one of their potentially highest paying jackpot mobile slots Realistic Games turned to the Boy King of Ancient Egypt for its game Tutankhamun.

This is a five-reel game that pays awards on 20 win lines. There is no progressive jackpot but within the app a top payout of 200,000 coins is possible. That maximum return is 40,000X for every coin played, up to a high of five.

Realistic lets the Tutankhamun name do most of the heavy lifting here. There are some golden objects that may have been among the things King Tut acquired during his ten-year reign from age 10 until 19 and had buried with him. There are the obligatory pyramids lurking in the background and funerary art of women on duty waiting to escort you into the tomb for some bonus play. The music carries an air of mystery as to what may be hiding inside that tomb that was discovered nearly intact in 1922 after more than 3000 years. Like most of its games Realistic sets Tutankhamun on the casino floor as one of an armada of slots games.

The King Tut Death Mask is the Wild and triggers the bonus multiplier in the game. It steps up in value as it substitutes for other symbols. One Death Mask in a winning line doubles up your stake, two triple it, three return 4X awards and four Death Masks bring back five times the rewards.

Win line payouts are awarded when symbols line up consecutively from the left reel. Five symbols return 500X or 1000X of your stake, depending on the symbol. If you can’t keep the paying Egyptian symbols in mind as you play you can press any symbol when the reels are stationery and find the actual return for the bet in play.

The Pyramid is the Scatter in Tutankhamun and five of them pay the maximum prize of 50,000 coins. Beyond that, three or more Pyramids trigger a Free Spins bonus round, introduced with a closing and crashing through of the vault. The Scatters also serve as a multiplier during the symbol-rich bonus round. There is a 3X multiplier in effect during Free Spins.

As long as the pyramids stand game developers are going to plumb the depths of Ancient Egyptian to create mobiles slots games. This is one of them.