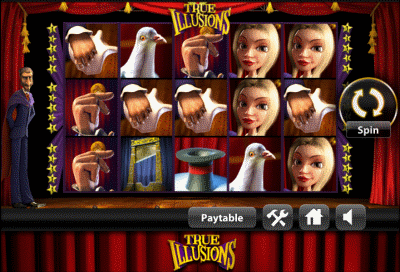 Despite the oxymoronic quality of its name there is nothing ambiguous about the conjuring up of coins in this magic-themed mobile slots game from Betsoft Gaming. The big reveal here is the smooth transition the developer was able to make in bringing its highly cinematic slots game from online to the small screen.

True Illusions is a five-reel animated slot that pays across from one to 30 paylines. Players can bet in units between .02 and .50 and up to a maximum of 150 units per line. There is no progressive jackpot but many bonus rounds available to produce magical rewards for the vigilant player.

Professor J. Magick is here to put on a magic show for you with his very blonde and very lovely assistant Myra, who we meet while she is just levitating around. Magick has brought his entire magic kit of props to entertain you – white doves, a deck of cards, a crystal ball to tell fortunes, sleeves, handkerchiefs, a top hat with an unfortunate hare and coins. The professor introduces each spin with a flair and performs an appropriate trick when each symbol registers a win. And you can count on plenty of sly looks being thrown about the red velvet-draped stage.

There is one truth here that is not an illusion: the Wild Card is what it claims to be. It can assume the shape of all other symbols but does not juice your wins created with any multipliers. Instead it is saving itself for the big finale – when the Stacked Wilds fill the centre reel the curtain closes and the auditorium is occupied by the magic box which Myra obediently enters. Professor Magick plunges swords into the box – one, two, three, four – will the horror never end? The sadistic illusionist finally opens the box so we can see – Myra has disappeared. And by magic the entire middle reel is locked in Wilds for seven spins as coins pour into your bank.

The Professor is also the Scatter and when he pops up three or more times he triggers Cascading Free Spins where the winning symbols vanish after each win allowing new symbols to take their play and produce more wins. So even though there are only five free games granted by Magick it has the illusion of seeming like more.

It is not a magic act without a few sleight of hand card tricks and when the Aces symbol shows up three or more times you are invited to a private session with Professor Magick for the Pick A Card, Any Card Bonus. Magick may be a trickster but you will win every time at this table.

Illusion only works if the audience’s attention can be diverted from the performer’s goal and the Professor is working overtime in True Illusions by providing many small wins in the show to keep your bank growing – or is that only an illusion.