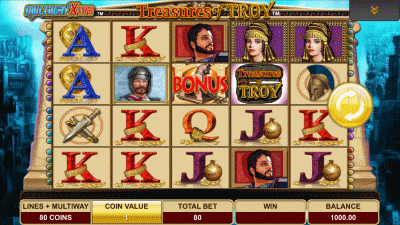 The Treasures of Troy mobile slots by IGT plays off one of the keystones of Greek mythology – the Trojan War. In Homer’s telling in the Iliad and the Odyssey there was only one treasure to be gained from the Greeks attacking Troy. That would be Helen of Sparta, the most beautiful woman in the world, who was kidnapped from her husband, the Spartan king Menelaus. But you are going to be after bigger game than a mere golden-dressed lass when you seek the Treasures of Troy.

This is a five-reel game with 1024 paylines. No misprint – each individual symbol on the reel can spin until you theoretically have 1024 ways to win in Treasures of Troy. You don’t have to activate this Multiway – your wins will be less frequent but heftier if you leave it off. There is no progressive jackpot.

The backdrop for Treasures of Troy is a blue-tinge ancient metropolis in what is now present-day Turkey. There are Greek warriors and armoured helmets and swords. There is also a lot of gold on hand which will keep your eyes on the prize. Scholars of antiquity will note that the Greeks were after revenge and blood – heck, Menelaus was even going to kill Helen before his resolve crumbled before her beauty. Helen is here as well and as expected she is the most valuable symbol in the mobile slots game. None of that would have made much of a slots game reward, however. When bonus times arrive the innocuous basic music gives way to serious martial marches.

If activated – and why not? – the Multiway is Treasures of Troy’s most captivating feature. At first it merely recreates the chaos of war with wins coming stacked up and down the reel columns in addition to left and right. You will never keep up with all the tiny wins but as you get in synch with the rhythm of the game you should be able to understand the rapid troop movements.

The Treasures of Troy logo is your Wild and the Scatter is the famous Trojan Horse, the ruse perpetrated by the Greeks that enabled them to storm the impregnable defences of Troy and end the nine-year war. Here you need two or more Trojan Horses on the centre reel to trigger the game’s only bonus. You receive five free spins for every Trojan Horse you bring to bear on the gates of Troy. When it’s all over you get to bask in the cheers of your fellow Greek soldiers who have brought down the city of Troy.

You can start with up to 20 free spins and keep re-triggering freebies up to 130 spins. Unlike Greek mythology you can look this gift horse in the mouth and know exactly what you are getting.